Our adventure is coming to an end. However, we have sold On Delay to Chris and Heather, who are going to be starting on their own two-year adventure (with five kids on board!) shortly. We met Chris (virtually) over a year ago when he posted some questions about our boat model on a cruisers’ forum. The timing worked out, and we are mid-delivery to San Francisco (see The Long passage home to San Francisco). As part of the sale process, Chris flew to Costa Rica to have the boat surveyed out of the water. This was done on an old-style rail lift.

There are very few places on the Pacific Coast between Ecuador and Mexico that have equipment large enough to pull On Delay out of the water. One such place is Samy’s Yard (Taller Manley) in Puntarenas, Costa Rica. This is not the Costa Rica of the travel brochures. Puntarenas is a run-down industrial fishing town where most of the hotels rent by the hour. Even our guidebook to Costa Rica described the town as the armpit of the country.

However, we found Puerto Azul, a small, friendly marina located a few miles from town.

Our haul-out appointment was 6:30 AM on Monday, April 21st. That was high tide. We couldn’t be late or we’d miss the tide. (So, it was a tad stressful when the starboard engine failed to start — Tony climbed into the engine compartment with a multimeter and a screwdriver and soon we were on our way.) 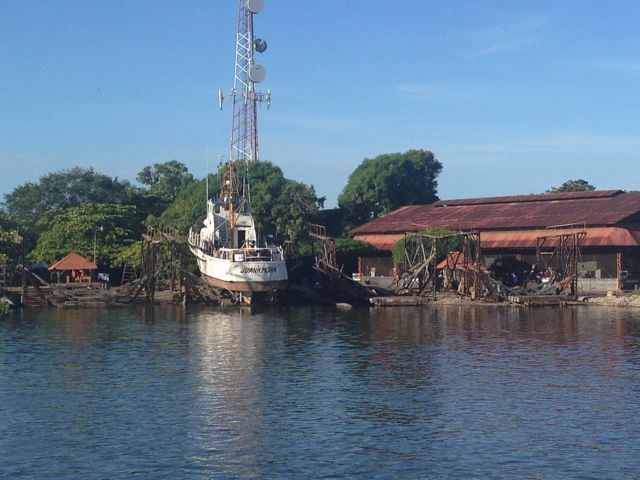 Viewing the boatyard early Monday morning. We’re assigned the crib on the left.

The boatyard and rail lift opened for business around 1939. It was opened by Samy’s father. No doubt parts are replaced as they rust out, but the technology and methodology are 75-years old.

The OSHA (Occupational Safety and Health Standards) people would have a fit at these working conditions. There were four guys in the water, using wedges and boards on strings and pulleys to secure On Delay in the crib. 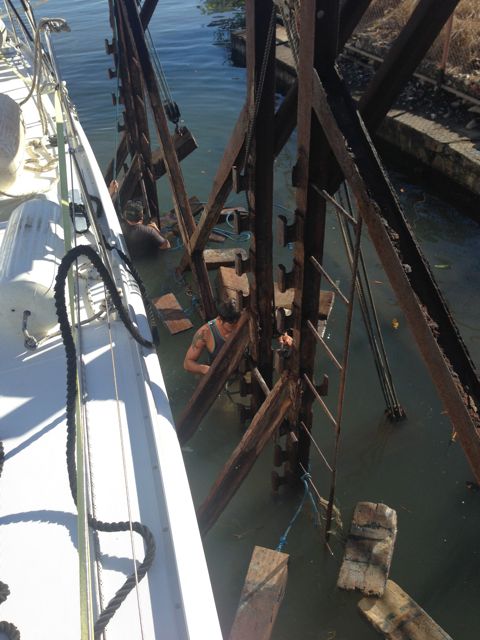 Securing On Delay in the crib.

Ibel the foreman directed from shore. I couldn’t understand a word he said.

This is Ibel. The big motor that pulls the cables is housed under the orange roof.

We were surprised by how quickly we were pulled up on the rails. The three of us stayed aboard for the ride. 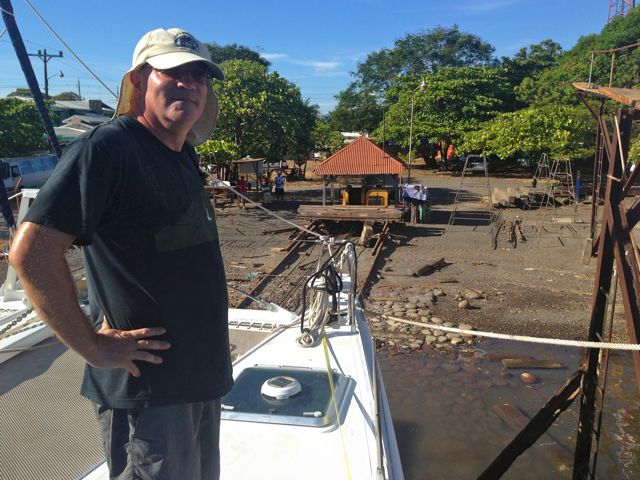 Tony and On Delay ready to roll.

The boat surveyor (Rick Kreps) came and did his survey and wrote his report. He seemed to like the boat well enough — told us she is in 5-star condition.

Note to other boat owners: If you get hauled at Samy’s yard DO NOT have the bottom cleaned. The bottom cleaners are in cahoots with the bottom painter. The cleaners scraped off the barnacles, yes, but they also took off as much paint as they could — to get us to agree to a paint job that afternoon. I thought that was very unprofessional.

We finished our out-of-the-water work by mid-afternoon, but On Delay couldn’t go back into the water until high tide the following morning. We asked about splashing (returning to the water) during the evening high tide but were told it was too dangerous after dark. 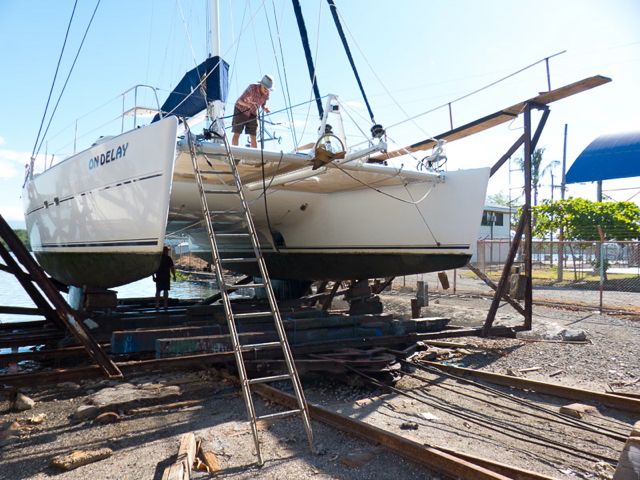 Exit the boat via ladder instead of dinghy or dock.

Splashing was a bit nerve-racking but went fine. We were fortunate that a friend of Tim Brandt (who we met at Quepos) was there to inspect another boat; he translated Ibel’s important instructions about what we needed to do exactly when with regards to starting the motors and untying the lines.

We still needed to leave Chris at the boatyard where his rental car was parked so we came along side “Condor” (see photo below) and dropped off Chris so he could boat-hop to the dock. Far from objecting to On Delay coming along side, the young guy on Condor thought it was quite fine and snapped photos of On Delay and Condor together. 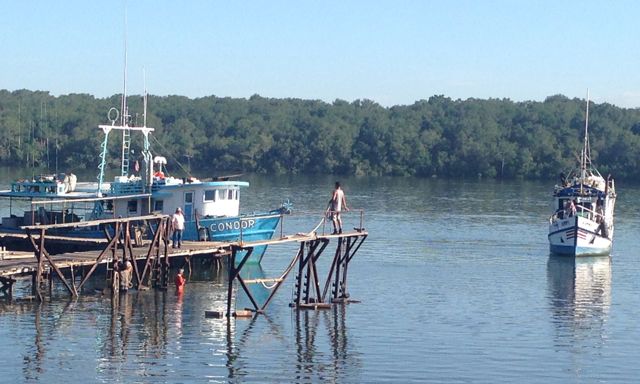 Condor at the dock and another boat approaching its crib.

Additional links about On Delay: