Andy position refers to the settee on the port side of the salon. The Andy position is the perfect place for the secondary to nap while on watch. 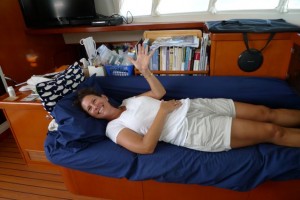 There is storage under the Andy position so if you ask where the spare winch is, the answer will be “in the aft Andy position”.

Etymology: The Andy position is named for our dear friend and fellow sailor, Andy Shaw, who has the knack for nabbing the most comfy napping position on any boat.

Ass-chair (verb) means to sit on a PFD or other floatation device and bob around in the water often with a beer in hand. Tony and Pete demonstrate in this photo.

Chip tax is a SPAF term that pre-dates On Delay, but is still very much in use. Any person at a table who has ordered french fries can be taxed a couple of fries by each person who did not order fries. No formal permission is needed: when the plates first arrive, the fry-less diner reaches across to the fry-endowed diner, says “chip tax”, and takes a couple.

Cruisers’ bedtime is 8:30 pm. We learned this in Grenada, the first place where we spent time in the “cruising community”. Lots of cruisers live by the sun: up at sunrise and to bed not so long after dark. It saves on lighting. The On Delay crew rarely adheres to cruisers’ bedtime.

Footballs are plastic grocery bags (aka carrier bags). We collect bags to use for garbage. To keep them neat, we fold them into a tidy “football” shape. 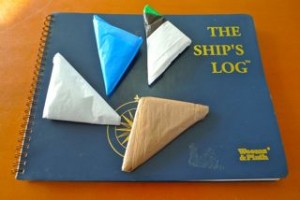 Going German is On Delay code for showering in the buff at the back of the boat. This seems to be common practice among German cruisers even in crowded anchorages. On Delay limits this practice to more secluded anchorages.

Interwebs is On Delay slang for the internet and for connection to the internet. One of the first questions we ask at a new anchorage is, “Do we have Interwebs?” There is often an unprotected wifi signal that we can pick up from the antenna at the top of the mast. (We are the Interweb pirates of the Caribbean.)

Kevin boats are tramp steamers that ply the coast from Colombia through Kuna Yala. They trade Colombian goods for bananas and coconuts harvested by the Kuna.

Etymology: The first boat of this type I saw was named “Kevin” — and I exclaimed, “Kevin. What a stupid name for a boat.” (I think that Kevin is a fine name for a boy but it seemed totally inappropriate as a name for a South American boat.)

Etymology: Should be pretty obvious to anyone who has had a few. This started in Belize with Ali B.

SPAF stands for “Strange Performance Art Fridays”. When we first met Pete, he would organize SPAF events in San Francisco for a group of friends. Spaf entered our vocabulary as a noun – the event; a verb – to attend the event; an adjective – to describe a worthy event; an adverb – spaffy; and spaffer – one who attends a spaf event.

Strategic eating is the art of cooperative seconds and thirds so as to finish a dish so that there are no leftovers. For example, “If we each eat one more piece of christophene, we can finish it.” or “I’m still a bit hungry; does anything need to be strategically eaten?”

Turtle used as a verb means to become distracted, as in, “Sorry I was going to make you a cup of tea and then I turtled.” Originally, we used the term “squirrel” from the Pixar movie Up but “turtle” seemed more appropriate at sea — because we all become distracted when we see a sea turtle.

Wet-butt is the result of getting splashed while dinghying from ship to shore or vice versa. Wet-butt is particularly annoying when one is dressed for nice dinner ashore.