Costa Rica is for tourists. The country seems perfectly geared for the 10-day family vacation. We did more classic tourist stuff in Costa Rica than usual. Read about it here.

First, to bring you up to date — After a six-week stay in Guatemala, Jane and Tony rejoined On Delay in Quepos, Costa Rica. A couple of weeks later, Pete and Gayle headed back to San Francisco to resume their land lives, leaving Tony and Jane with On Delay until it was time to take her to San Francisco. We’ve been making the most of our final weeks on On Delay — I didn’t pause for even long enough to write a blog post. Apologies.

The Silliest — The silliest tourist activity we did in Costa Rica was the Segway tour in Quepos. Neither of us had ridden a Segway before, but in a short time we were zipping around on Segways along with a nice family from New York on their 10-day family vacation. 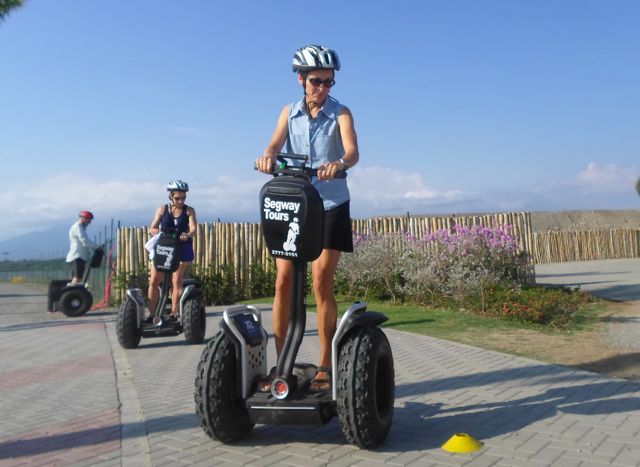 We low-fived small children from our Segways. 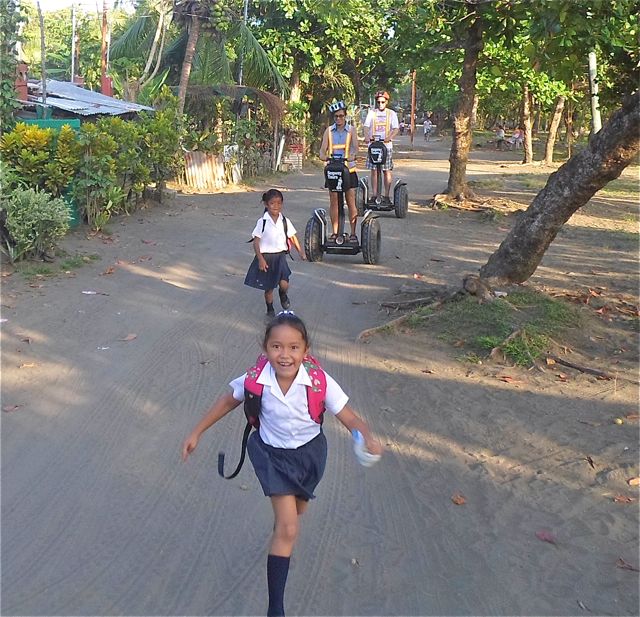 School children are amused by gringos on Segways. 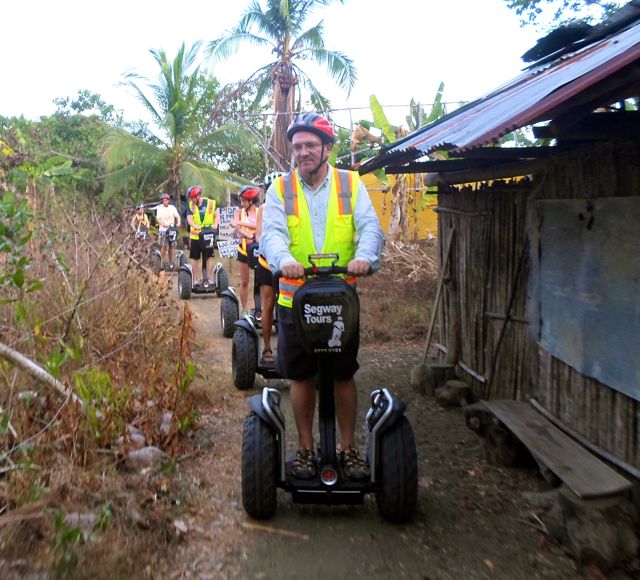 A narrow path lined with barbed wire. Time to focus on Segway skills.

It was good silly fun that in the USA would have been prohibited by a host of liability issues.

The Funnest — The most fun tourist activity we did in Costa Rica was the whitewater rafting trip down the El Chorro. I wondered if we were being foolhardy signing up for a class IV/V trip with no rafting experience. But, it was fine. Our guide was so experienced, all we had to do was (i) stay in the boat and (ii) have fun. Okay — Tony didn’t manage (i) but he certainly managed (ii). 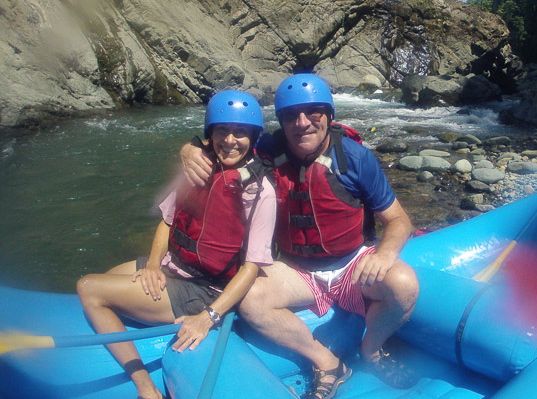 Tony and Jane: safety before style. 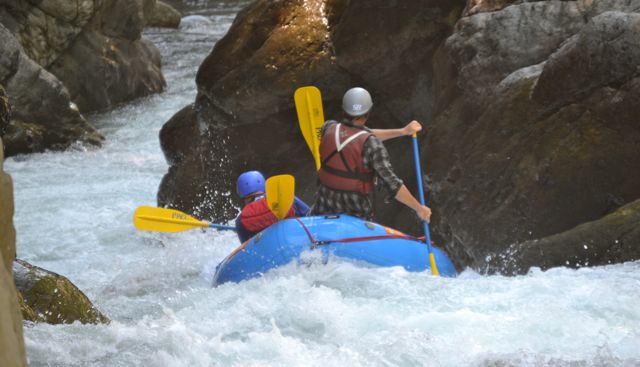 Here we go down the rapids.

It was super-well organized trip. There were two rafts, each with a guide and two passengers. There was also a photographer/assistant who followed in a kayak. 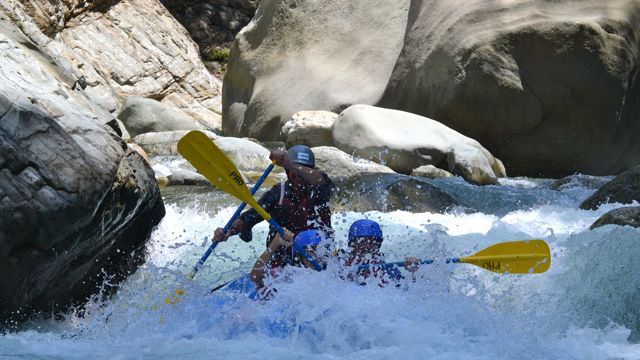 And another set of rapids.

We got wet but it didn’t matter — it was such a warm day and the water is warm too. We even stopped in a quiet bend to swim. 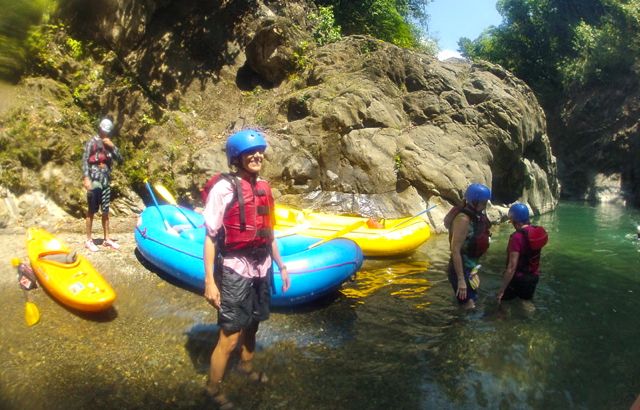 The Best — The overall best activity was our day of off-shore fishing.

The Pacific coast of Costa Rica is the place for exciting sports fishing, especially marlin and sailfish. We were in Quepos during sailfish season. Quepos’s Pez Vela marina is full of expensive and expensively equipped fishing boats — many are for charter but some are private too.

Joe and Tony did a good much research and some price negotiation before choosing a boat for our one-day fishing trip. They picked well. The crew of Makaira gave a first-class taste of sport fishing.

What first seemed like a very expensive day ended up feeling like good value when we considered:

The trip started with the unexpected: a humpbacked whale sighting. The captain said that it was rare to see. 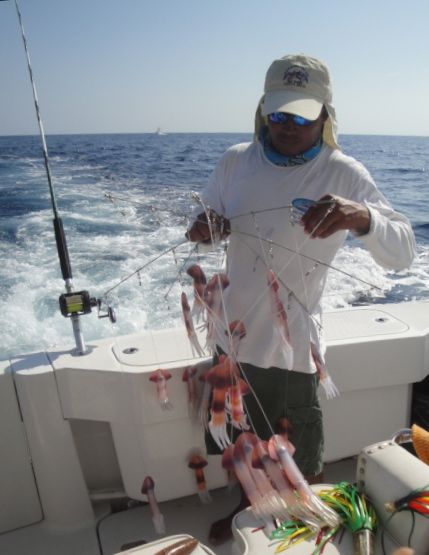 These are the teaser squid without hooks that get trailed behind the boat to attract but not catch the fish. 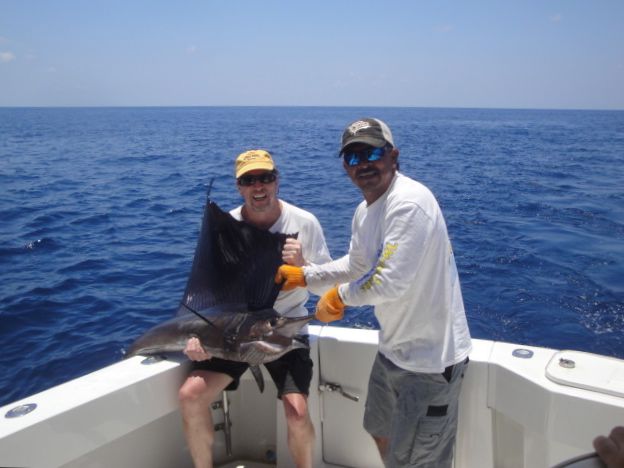 The prize sport fish are the sail fish. Joe and Jim each caught one. Joe, assisted by Carlos, displays his catch (and release). 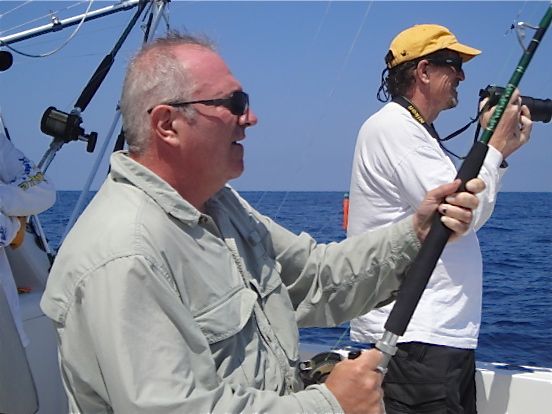 Tony almost caught a sailfish. Here he is reeling in the one that got away.

After the sail fish, the skipper found a school of yellow fin tuna. These were not released. They were all brought aboard, gutted and filleted. We took half a dozen and left the same for the crew. 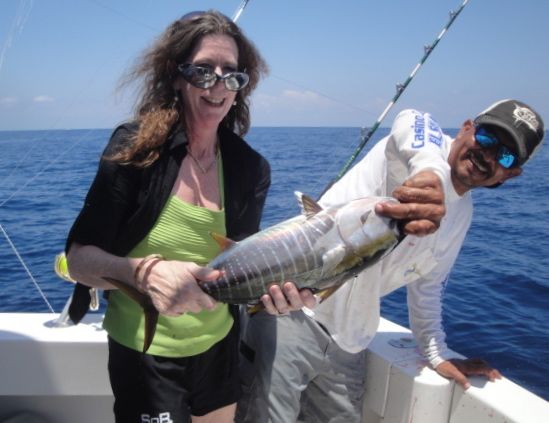 There were so many tuna that at one point three rods had fish on them at the same time. We also caught bonito tuna and jack crevalle tuna — but yellow fin are the most delicious. 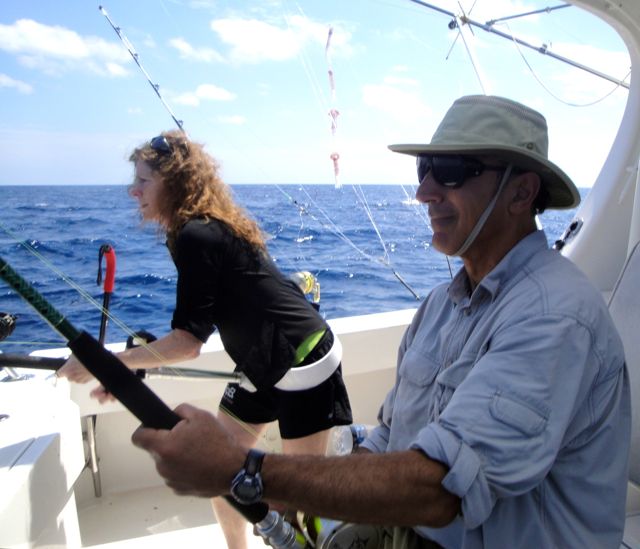 Jim and Kathy reeling in dinner.

On the trip back to shore, the captain prepared some of the yellow fin as sashimi with hot wasabi and soy sauce. 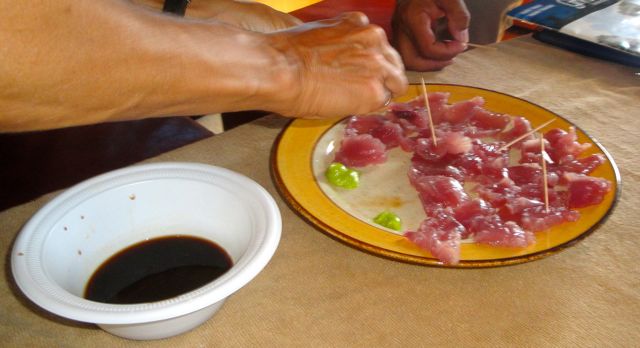 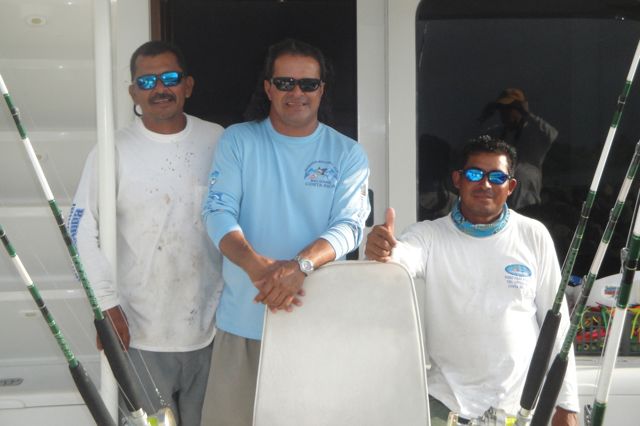 The awesome crew of Makaira: Carlos, Captain Jesus, and Mimo.

To learn more about these tour operators, check out these links below:

3 thoughts on “A Trio of tourist activities in Costa Rica”