Around midday, we motored from Taboga and dropped anchor at the “Las Brisas” anchorage, which is just off Isla Períco off the Amador Causeway. There are lots of boats in the anchorage; it is a big enough population to have a cruisers’ net. The following morning, Siggy and Hilary flew home [sniff].

For the story of our canal transit, see Our shortest crossing: from one ocean to another.

We flew the spinnaker for much of the 17 mile trip. This stretch of Panama coast is very beautiful, and trip was made poignant by the realization that this might be the last time we sail On Delay in the Caribbean. 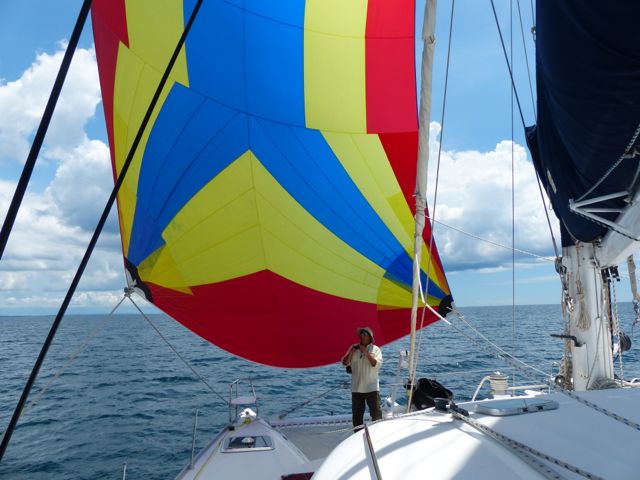 Sailing slowly to Shelter Bay; perhaps our last sail with On Delay in the Caribbean.

We did a 12-hour night sail from Chichime (a pretty place very near El Porvenir) to the bay and town of Portobelo. (Miriam and Gayle disembarked at Portobelo and travelled by car to the Panama airport.) Our night sail was mostly motoring but the trip was illuminated with lots of lightening — mostly far away but some disconcertingly close. On the radar, we watched the storms amass and then dissipate.