We checked out of Aruba on Tuesday afternoon (Sept 25th) and arrived in Colombia around midday on Thursday (Sept 27th). We sailed about 275 miles.

It was a downwind sail, sometimes we sailed wing on wing but mostly we sailed deep broad reach. The wind was variable. We had everything from a triple-reefed main and a double-reefed jib to all canvas out through to no-canvas/motoring. Our SOG (speed over ground) was bigger than our boat speed (speed through the water). That means help from the current. Plus, at times, there were some 6 ft swells pushing us along.

In the middle of the first night, we were hailed on the radio. The hailer was speaking Spanish. Eventually, we pieced together that the Venezuelan navy did not want us to go near little islands at the entrance to the Gulf of Venezuela – we were heading to them and hoped to go south of them. The guy on the radio couldn’t speak English and we couldn’t understand his Spanish. We told him (in Spanish) that we were a sailboat with four people on board. But there was something else he wanted to know that we couldn’t figure out. Finally, he shouted “Fuck you” a couple of times and that’s the last we heard from him. We changed course to go well north of the islands. We also turned off our AIS signal and our lights. It was scary because we did not want to be boarded by the Venezuelan navy, or, worse, we couldn’t be sure that it was the Venezuelan navy and not some pirate claiming to be the navy. On the radar, we could see a small boat shadowing us until we were well east of the islands and into Colombian waters.

Other excitement was our first thunderstorm at sea. A torrent of rain and loads of thunder and lightening. I watched from inside – it didn’t seem necessary for us all to get soaked. Gayle counted the spacing between lightening and thunder; 3 seconds was the closest. Following the great rain, we saw two other components of the Noah’s ark story: a full rainbow and a dove.

It was a pretty little dove and it stayed with us for about 6 hours. Pete chose Dave for its name. We are up to D on our animal alphabet (Arthur, Beverly, Cat, and now Dave the Dove.) Dave would get spooked, leave the boat and fly around, realize that we were the best option and land again. Around the same time Dave arrived, Pete and Gayle spotted two dolphins playing around our boat. It had been a while since we’d seen dolphins. People talk about the “bluebird of happiness” but I prefer the “dolphin of happiness”. Dolphins are always cheering.

Here are some pictures from our passage: 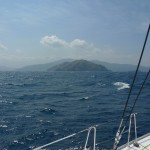 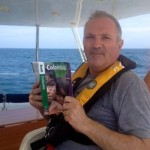 Tony reads up about Colombia while on the passage from Aruba. 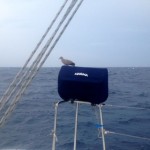 This is one of Dave’s favourite spots. Too bad about the present that he left on it. 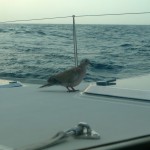 Here is Dave the dove on the deck. 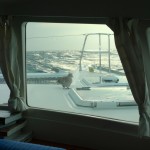 I spy Dave the dove through the salon window.