Many of you enjoyed our early post about out first boat pet, Arthur. (See Our day with Arthur, the tiny octopus.)
This post is about our second boat pet Beverly, a Grenadian gecko. (I decided that our boat pets should be named sequentially, A, B, C, etc.)

One night at dinner in Le Phare Bleu marina restaurant, I found a baby gecko and brought it to Tony. It sat happily on him for a while and then wandered off while we continued with dinner. That got us thinking that a gecko might make a good boat pet. 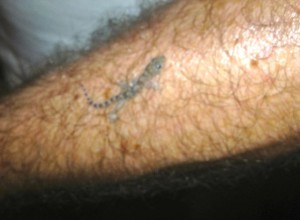 A few days later, I found a slightly bigger gecko and convinced her into a paper bag for transport to the boat. Gayle chose Beverly for this pet’s name. A very nice name. 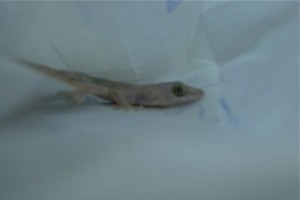 Beverly in the bag.

Beverly didn’t work out quite as well as hoped for our boat pet. Although Bev had no difficulty climbing walls in the marina restaurant, the highly varnished wood walls of the boat were too much for her. She always ended up at her lowest level of potential energy.

The first morning we found her way down in Paul’s cabin, 10 feet below her starting point and with no hope of climbing back up. 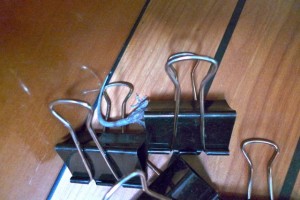 Bev on the sole (floor) of Paul’s cabin, hiding out in a bulldog clip thinking she can’t be seen.

Then, to our horror, Bev launched herself into the bilge which Tony had open while working on the macerating pump. I feared that we would never see her again, except perhaps as a dead floating object when cleaning the bilge. 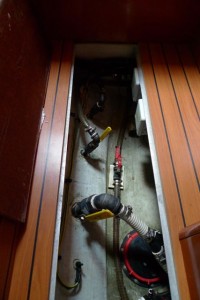 Oh no! not the bilge. This is the bilge into which Bev jumped when Tony tried to pick her up.

I was happy to see Bev back on the cabin sole when we returned from our overnight road trip. We made various attempts to capture her for return to land. Also, she came close to getting squished and to getting vacuumed. Life on board was not for Bev. I caught her once and amused myself by feeding her flying ants while waiting for an opportunity to return her to the restaurant. After, the thiflying, the box didn’t get properly covered and she escaped again. The next time she reappeared, I didn’t waste time taking her back — letting her out exactly where I found her four days earlier. 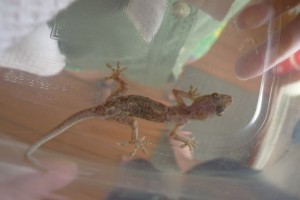 The last photo of Bev before I return her to the restaurant where I found her. She is much bigger than when she came aboard. Our boat is a good source of tasty bugs.

3 thoughts on “B is for Beverly”