On the way to dinner at Beirut (local place with great Mediterranean food), Pete noticed movement on the walking path.  What should we see, a two-toed SLOTH!

On the way to eat meze, we encounter a sloth crossing the road… very very slowly.

The On Delay crew is rather obsessed with the sloths.

Imagine a very furry small-headed koala bear crawling at the pace of a worm, a slow worm.  Sloths, they are slow, very slow, and this one, not an exception to the slow rule.

Eric petted said sloth, Gayle pulled out a camera for a photo op and Tony developed big plans for sloth.  Discussions included how to “rescue” sloth, because clearly it was in danger.  Dogs on the path could eat it, although with the speed at which sloths move, it is hard to imagine they taste good or everything would be a predator. 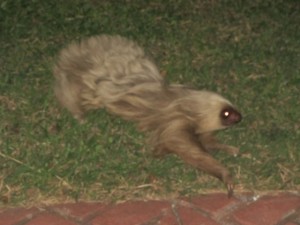 Stealthy sloth picks up the pace.

Discussions began, do we prevent a potential sloth homicide, do we help speed sloth process getting to the other side of the road (potential start of a joke), or do we leave sloth in peace to do sloth-like activities.  The decision was made and Tony leapt into action, especially since the crew of On Delay is so helpful.  We could prevent a potential homicide and get sloth to the other side of the road! 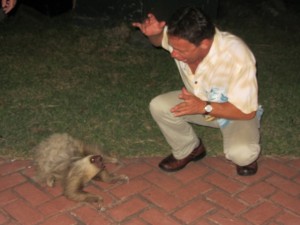 Eric and the sloth… talking about options.

Imagine a slow motion movie where the scene plays out with spooky psycho music in the background and you want to scream at the victim (in this case, sloth) to move faster.  One very slow frame at a time, our movie progressed more like a comedy.  Tony picked up sloth under “sloth’s” front legs, sloth face starting to curl up in a sneer, Tony began running across the street, sloth toes begin to extend, sloth began to hiss, Tony (at this point followed by Eric) made it across the two-lane street and put sloth on the other side of a fence separating the trees from the street.

Hard to say if we helped, although we have visions of the sloth living happily ever after in the bigger trees on the other side of the road, with other sloths.  In the meantime, we continue to work on potential jokes that begin with “why did the sloth cross the road”…maybe we should have a contest for all of you!