For one delightful week, Lynda (Gayle’s elder sister) and Eric (Lynda’s boyfriend) joined the mostly land-based crew of On Delay for adventures and laughs, great meals in many forms, knot lessons, mast climbing, an overnight trip to a nearby island, and even a little sailing. Here are highlights from their visit.

The trip from California is relatively easy with direct flights to Panama City from LAX on United’s partner COPA Airlines. (COPA is a nice airline; it still serves meals, of the chicken-or-pasta-variety, to its economy passengers.)

The beginning of the vacation: Flying into Panama City.

On the Sunday, Lynda and Eric arrived. They were our most laden sherpas to date. They brought boat parts, boat sheets (aka new ropes), books, medical supplies including QuikClot which I hope we never need to use, eats from home including lots of dried mushrooms! Somehow, our two sherpas managed to pack all of that into tiny suitcases; when they started unpacking it was like a clown car act at the circus.

That first day, we kept a low profile, strolling to Sunday brunch at Mi Ranchito, a popular restaurant down the street from the apartment. They feature a Panamanian breakfast buffet of mostly beige delights (see photo), including the mysterious “bofe picadillo”. None of the staff could or would tell us what it was, other than it was from a cow. [Aside: Later we learned from Honduran acquaintance that bofe is pulmones — so “bofe picadillo” is beef lung stew. Probably, the first time we (haggis-eaters excepted) have tasted lung — lungs are not sold for human consumption in the US.] 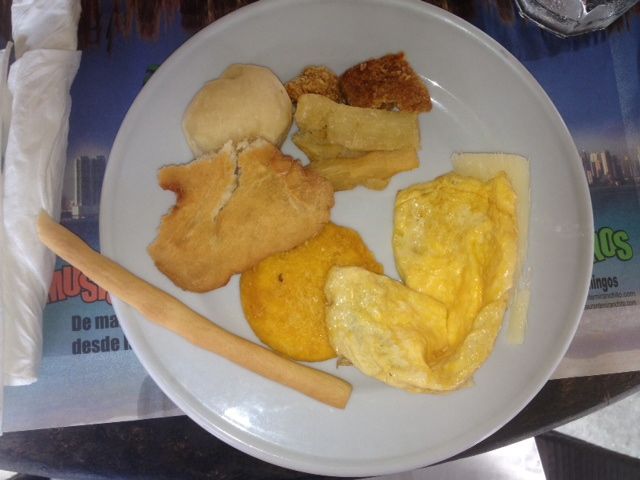 Monday was a busy day: Gayle did cruisers net on the VHF. Pete, Gayle, Lynda, and Eric set off in the big rental car and did errands, most importantly picking up On Delay’s re-covered interior upholstery from El Tapiz (thumbs up for a local business). The trip to El Tapiz was an eye-opener for Lynda who wrote: “Pick up cushions……in the ghetto, passing armed guards in bullet proof vests, we picked up the cushions, all the while feeling like ‘someone doesn’t belong heeeeeerre’.”

The highlight of Tuesday was dinner at La Posta, one of our favorite restaurants in Panama City. The evening kicked off with a little friendly competition: a boys vs girls cab race to the restaurant. Boys won on the speed; girls won on the price (go girls!). Once there, we enjoyed a delicious dinner, which included good martinis (difficult to find in places without a bar culture). The group split up after dinner with one contingent heading back to the apartment and a second checking out for local color. We found the color, did a little dancing, saw a baby shower in a bar (okay, maybe it was a wedding shower), and made it home before too late for a good night’s sleep.

On Wednesday, Eric climbed the mast. Climbing the mast was high (pun intended) on Eric’s to-do list for this vacation. He took some great pictures from the top of the mast and also some useful ones — helping us to see exactly what had been damaged by the lightning strike. 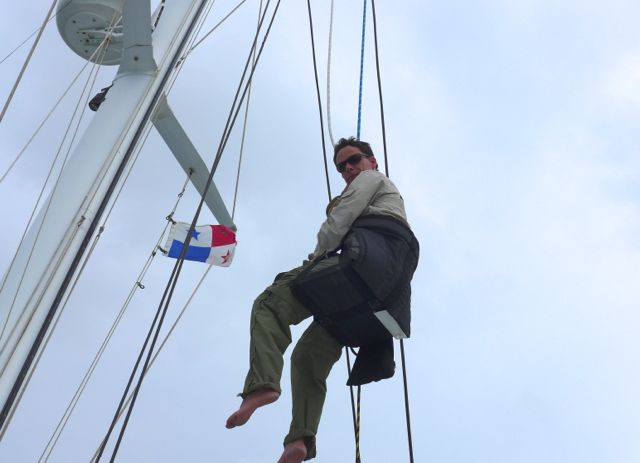 Eric partway up the mast. 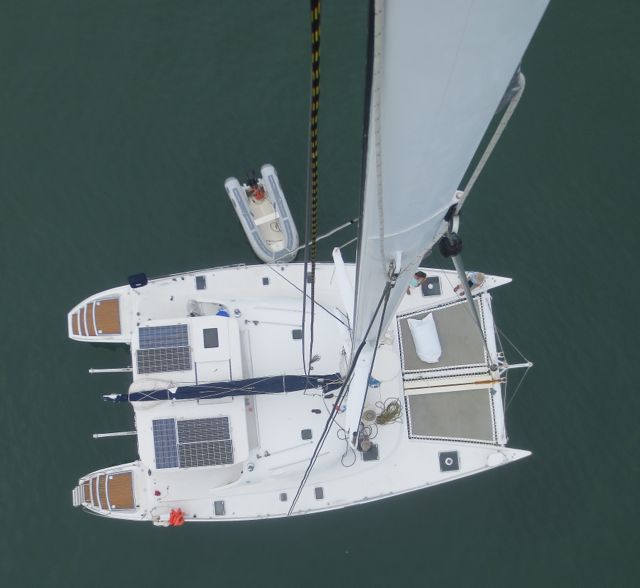 On Delay from a different perspective. 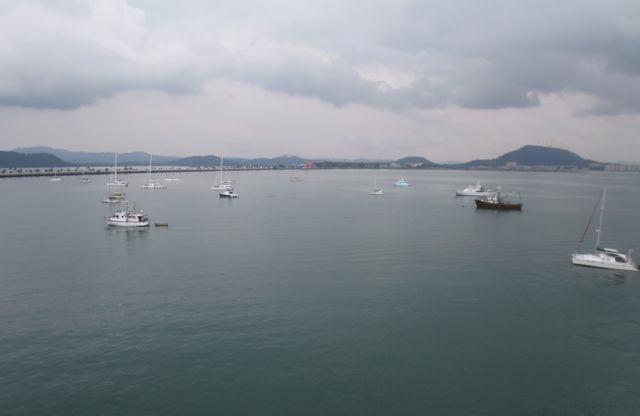 Eric’s view of the Las Brisas anchorage from the top of the mast.

Thursday and Friday were an overnight trip to Tobago, an island about five miles away. It was good to up anchor and move the boat and drop anchor again in a pretty bay.

Dinner involved a short walk into town, passing beautiful greenery and climbing a staircase to a lovely hilltop restaurant (Vereda Tropical). On the way, the native frogs sounded amazingly like the electronic firing sound in the old game “caterpillar”! The service was great, and so were the cocktails and food. On the way back, there were dinghy shenanigans: the tide wasn’t as high as expected and we got stuck on the sandbar, all five in the dinghy! Our hero, Eric, rolled up his pant legs and pulled us across the bar.

Thursday night on the boat was a hot one. Lynda recalls: “It was so hot, so ridiculously humid and hot, that I lay in my boat bedroom, staring at the ceiling, and wondering if I could possibly get any warmer. I pinched my forearms and they felt well done, I lost 5 pounds in perspiration that night. I stuck my fingertips out the window, desperately fanning some air inward. I felt a kinship with the poached egg. I came back to Fresno, and told my equator area native friends that I now understood why they left, and how Fresno could actually seem pleasant.”

But, on Friday morning, there was swimming! Lynda made friends with a pelican, and the two of them spent some time swimming together although both swimmers seemed nervous. Lynda and Gayle swam to the beach and then took a walk on the site of the previous night’s grounding. With 16-foot swings in tide, the landscape at Taboga changes a couple of times a day! On our journey back to the Las Brisas off Panama City, we actually got to sail. And, Lynda’s brown pelican rode on the dinghy all the way back to Panama City.

During the week, there was also time to do some classic tourist things: a visit to Casco Viejo and to the Mireflores locks. 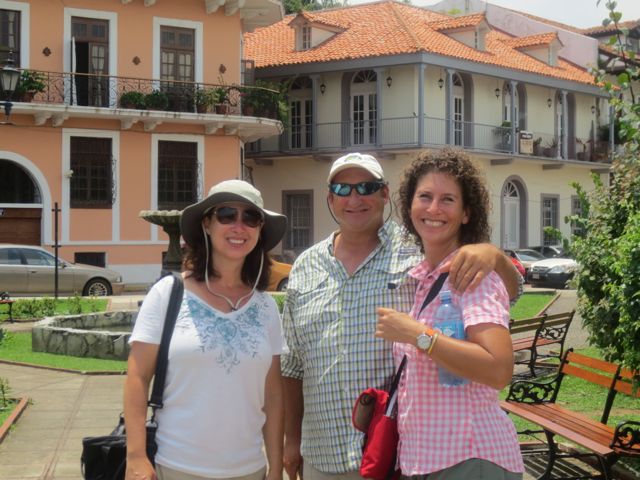 Casco Viejo (the second old town — post 1671) is a must see in Panama City. Here are turistas Lynda, Pete, and Gayle. 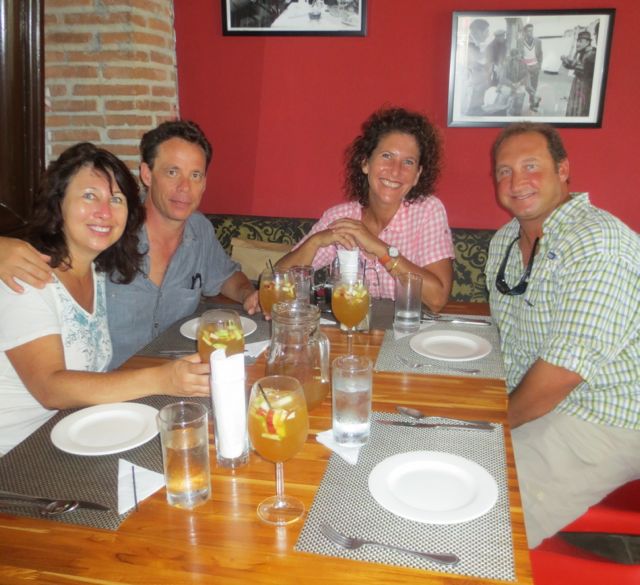 Our foursome in one of the trendy restaurants in Casco Viejo. 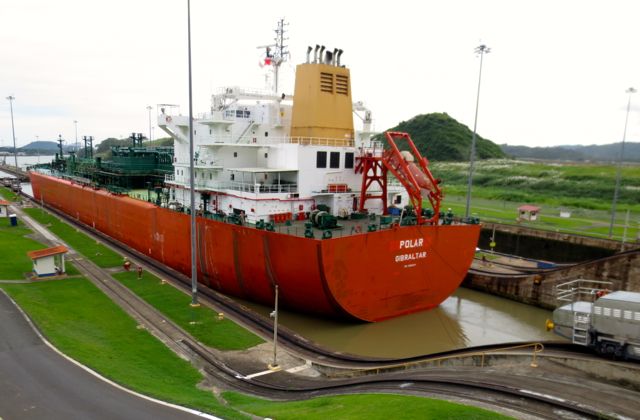 Not much room to spare when there’s a big boat in the locks.

Another memorable event in Eric and Lynda’s week with us was the sloth encounter… but that’s a story of its own. 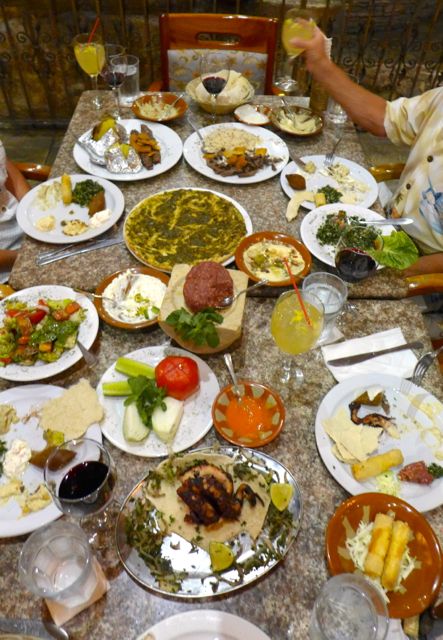