Wednesday May 30th to Thursday May 31st: At sea between Great Exuma and Turks and Caicos

These were our first full days at sea. It took a while to get used to it. We did watches: four hours during the day and three hours at night. This is when it’s great to be a foursome. Cruising couples have to be on watch half the day, we only had to be on watch for a quarter of the day.

Not much to see: In one of my four hour watches, I saw : one flying fish, one small floating plastic item, two spouts from a whale.

A high point was heaving to and going for a midday swim in flat seas, 30 miles from land where the sea was 15,000 ft deep. 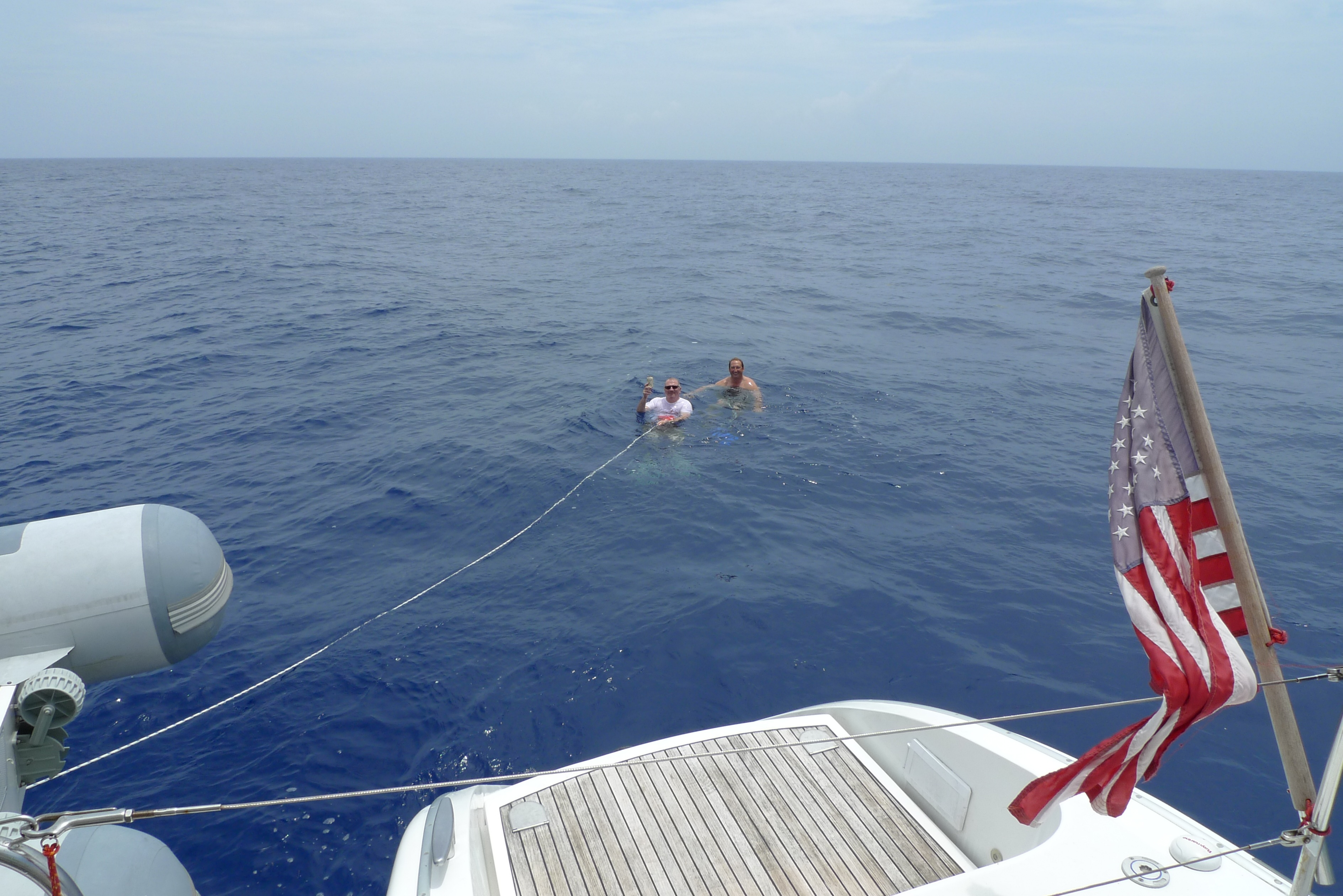 A cooling dip in the sea.

Tony and Pete hanging off a line at back of the boat. Yes, that’s a beer in Tony’s hand.

After the quiet three-day weekend, George Town was busy. We got diesel and went to the grocery store. (The store sold out of lettuce in half an hour.) The shoppers were a mixture of locals and cruisers.

I was hoping for some local produce at the “straw market” – but it was mostly tourist trinkets (yes, many made out of straw).  We did get a bag of local “cherries”.  Odd, juicy fruit with a pit inside – but not related to regular cherries. 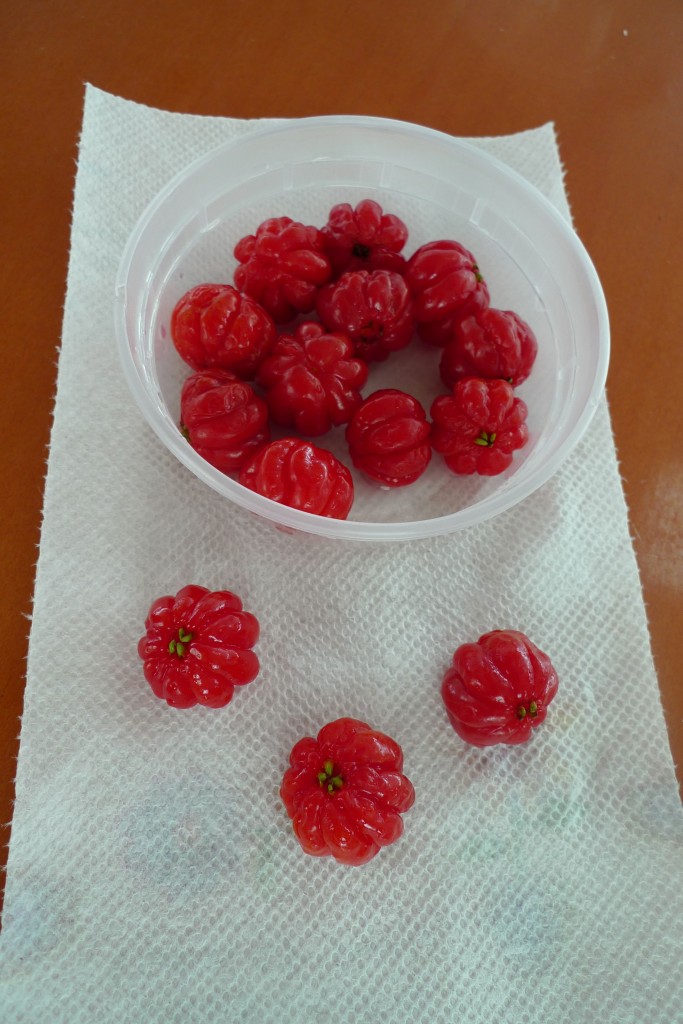 “Cherries” from the straw market at George Town, Great Exuma, Bahamas. (Odd, juicey fruit with a pit inside — but not related to regular cherries.)

Today was a holiday (Whit Monday) and the town was very quiet – even quieter than Sunday. However, the Laundromat was open from 9 – noon; we took advantage.

Tony and Pete repaired the auto-helm in the port engine and changed the sail-drive oil. While they were working, a dolphin mother and her calf came right up to the boat. I’d never seen a mother and baby before – they moved in perfect sync and leisurely swam the length of the boat.

We sailed most of the way (it wasn’t far). There are lots of boats at George Town.

Anchor up by 7 am. We sailed and then motored south to Flamingo Bay, arriving in time for a sunset dip.

It was stormy for much of the day. We hung out at Hawsbill for the day. In the late afternoon, Pete, Tony, and Jane went ashore to explore.

There was wind (in the wrongish direction). We sailed half the way in and motored the rest. Hawksbill is a very pretty anchorage, the prettiest to date. And, we had it all to ourselves.

We got both anchors out of the water and headed in the howling wind into the Highbourne Cay marina where we got a space at the dock. Tony did a great job getting us in. This is our first marina overnight.

We motored and sailed and motor-sailed through the night. We dropped Anchor at Allan’s Cay. It was stink hot. I went for a swim – there was surge but no current. Gayle was a super hero and did laundry.

Later we headed to Highbourne Cay where Pete and Tony went off in the dinghy and Pete speared a nice summer crab and Tony cooked it. In the evening, we enjoyed dinner at the marina restaurant. The wind kicked up and the rain came down and we put out a second anchor at 10:30 pm – such fun.

Monday May 21st: Morgan’s Bluff to Nicoll’s town and back to Evan’s Bay, Bahamas

We carefully motored inside the reef (the third largest barrier reef in the world) to Nicoll’s Town. There wasn’t much open in Nicoll’s Town. Monday is a slow day on the island. We sampled the conch salad at the SlyFox beach bar—the conchs were killed and cleaned in front of our very eyes.

We anchored in the outer harbour and enjoyed a lazy afternoon. In the evening, we dinghied to the rough bar in the inner harbour for some beers and a spicy conch salad.

After some maintenance and then SNUBA fun in Chub Cay, we moved the short distance to Frazer’s Hog Cay. In the evening, we went to the Berry Islands Club and enjoyed a few drinks and meeting some of the locals: Don and Estelle and George and Mava and Harry the owner/barman. As we were leaving, Harry gave Gayle and Jane tank tops with the club logo — one size fits all. 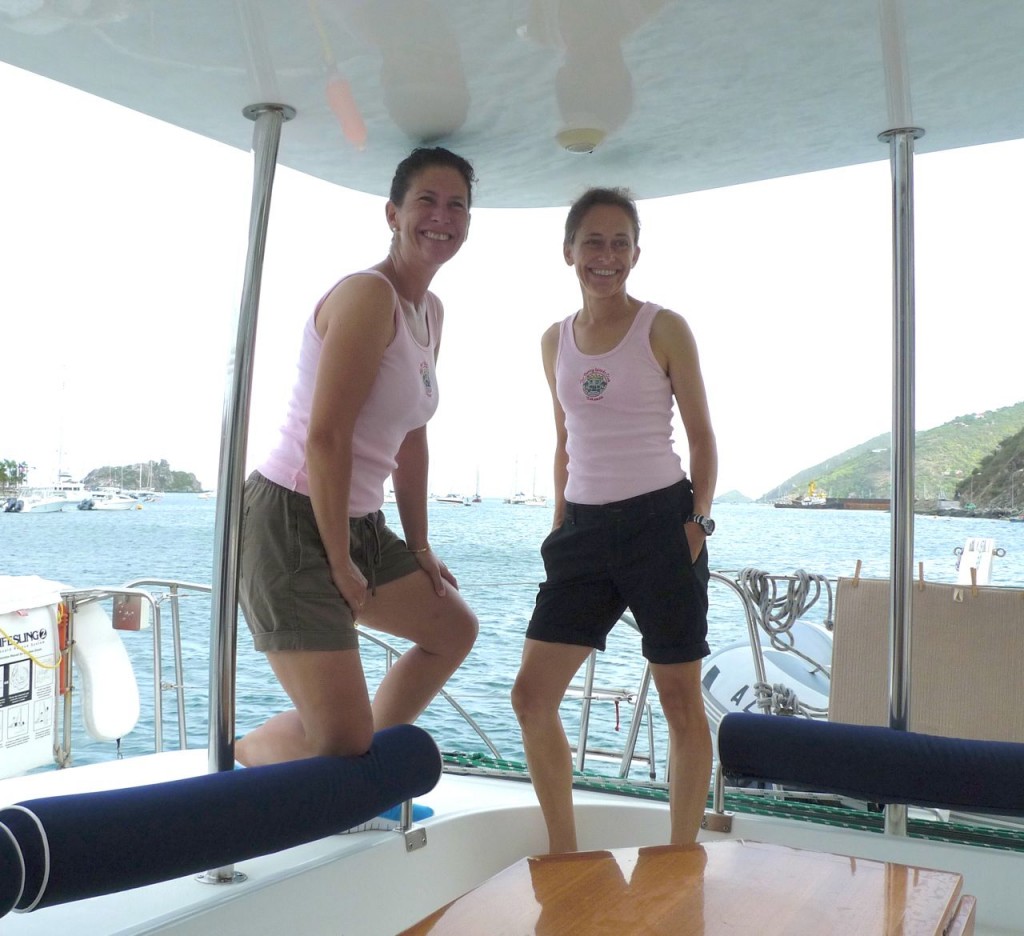 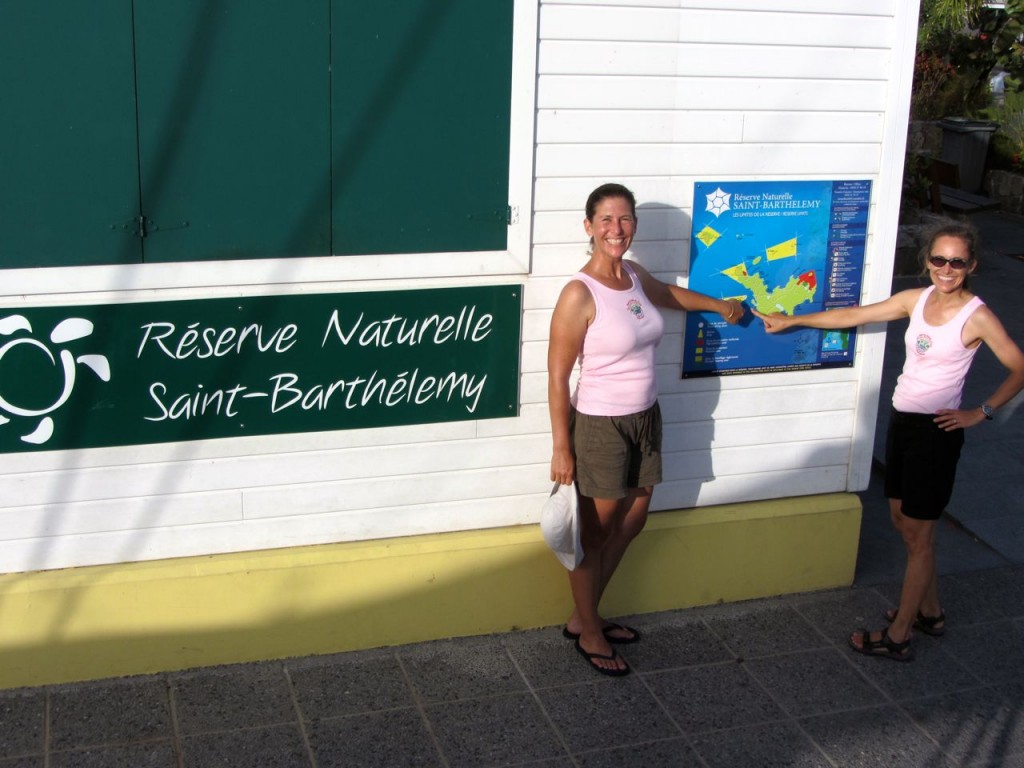 Another shot of Gayle and Jane and their pink tanks in St Barts.

We checked in at the Chub Cay Club. Lots of forms and carbon paper and a trip to the local airport to complete the process. Pete speared his first fish.

We set off at 7 am in the pouring rain. We motored across the Grand Bahama Bank which was big and very shallow – averaging around 12 feet deep.

We arrived at Gun Cay at first light. We hung out for most of the day. In the late afternoon we moved south to an anchorage that would put us in a better position to leave the next morning.

We left Fiesta Way in the afternoon. Our original plan was to motor down the inland waterway to Miami and then set out for the Bahamas from Miami on Wednesday morning. However, the guide book omitted to tell us about one fixed bridge in the waterway – we had six bridges opened and closed for us along the waterway and then we came up to the fixed bridge that was just too low for our mast height). We had to turn around and retrace our steps (with associated bridge openings).

Instead of Miami, we left from Port Everglades and motor the night across the Gulf Stream. (Our Gulf Stream crossing was happily anti-climatic.)

3 thoughts on “Route recap: May”