While heading to the Cucumber Marina in Belize City to collect Tony and Jane and Rikki (our next guest on On Delay), we caught a fish…a REALLY BIG fish.  Pete took nearly 30 minutes to reel this in, commanding me at the helm with Wickey as his backup.
The rod and reel did great.  Our gaff, it looks little with this size fish on the end.

A HUGE fish…took almost 30 minutes to get on board! 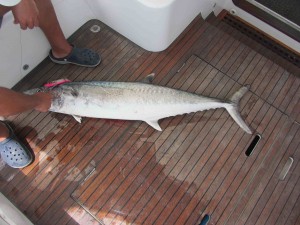 After a soothing drink of rum in the gills of the fish, the fight was over. 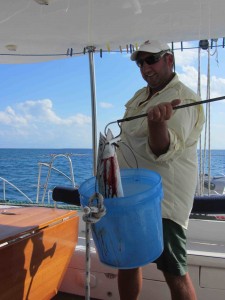 The usual size fish of On Delay.

We were still 45 minutes from the marina and needed to keep cool (the fish, that is). 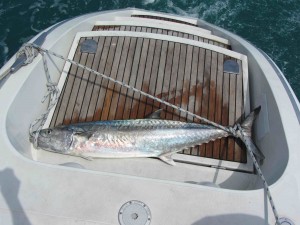 Pete lashed the fish to the transom…it was too big for any of our buckets. 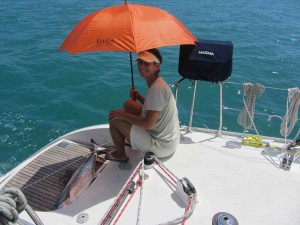 With 45 minutes left to get to the marina, we kept the fish cool with water from the transom and a parasol.

Processing took almost 2 hours on the dock after we were safety tied up.

Steaks were cut with the help of the machete and a large hammer. 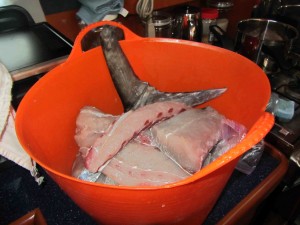 Too big for the bucket in whole form, at the end of processing, we have many meals!

Kingfish is delicious in:  fish soup, ceviche, sashimi, curry, steaks (grilled and fried – at a local restaurant), sandwiches (with spicy coleslaw and horseradish), “sous-vided” and in other ways that I am probably overlooking.

3 thoughts on “A Really Big Fish”