Day two, and the journey continues through towns, past school buses, over speed humps (which are also considered cross-walks in Belize), the zoo, the prison and lots of other stuff.

After breakfast we set off for the Mayan Ruins in Xunantunich (pronounced Shoo-nahn-too-nech), meaning Stone Woman.

We crossed the river on a hand-crank ferry, and arrived at the ruins before the cruise ship tourists, and were only two of the ten visitors that morning. 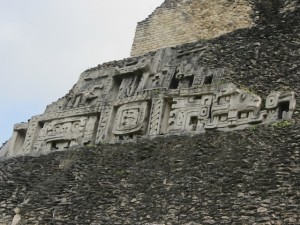 The carvings at the ruins were awesome in size. 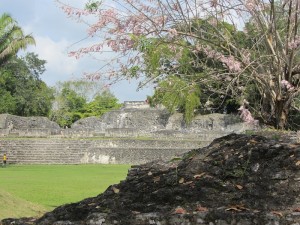 With trees of Wysteria in bloom, the grounds showed beautiful views. 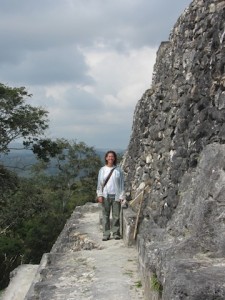 We climbed to the top, looking out over Cayo and appreciating a slight breeze.

After a wonderful walk around the ruins, hiking to the top of the temple; enjoying the scenery and watching the local school kids run around and make themselves tired.  These are some of the smaller ruins in the country and believed to have been abandoned around 800 AD.  An awesome site and considering the height, an amazing architectural feat. 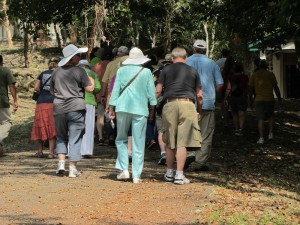 And, the people came (some of them went, too).

As we were leaving, tour buses of tourists began arriving. 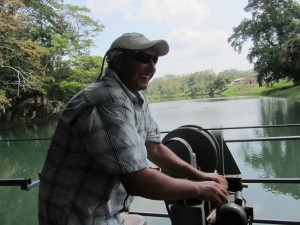 Pete helps us get across the river faster. For the privilege of cranking, we tipped the nice man.

We received a recommendation for lunch at Benny’s, a local favorite that on a good day served stew pibil, which is pork roasted for hours in the ground and then pulled and delivered on a plate with rice and beans.  They also offered homemade flour tortillas, a real treat considering most eat corn here.  Oh, those tortillas were delicious with my breakfast of eggs.

After lunch, back to Spanish Lookout, pick up the windlass, stand in awe of Aaron Janzen, stop at the Farmers Trading Post for a new machete and head back towards Belize City.

About 30 minutes outside of Belize City, stands the Belize Zoo, a wild animal refuge for all sorts of indigenous creatures.  Not large, they do a nice job of supporting injured animals, rehabilitating, and when possible even returning them to the wild. 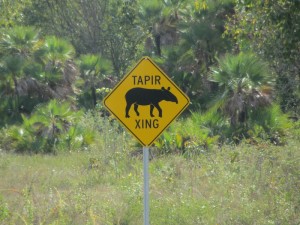 Wild animal crossing. Not to be confused with a Gibnut, the Tapir should not be stewed.

In Hattieville, there is the equivalent of San Quentin Prison.  With only one prison in the whole of Belize, this place houses pick-pockets and murderers, all in one place.  Interestingly, about 10 years ago, the prison went through a make-over of sorts and added farming and a gift shop.  The farming helps supplement the food for the prison, and the gift shop provides additional funds for the prison by selling the crafts of the inmates.  We drove into the parking lot, apparently, they knew why we were there, and as we entered the razor wire gates, were shuttled to the gift shop by the manager, a gentleman in orange scrubs with a number printed on the side of his pant leg, rubber shower shoes and keys on a string around his neck.  I was sure we would be able to pick up some coasters, a black t-shirt for Tony and maybe some jewelry for the girls…but the gift shop was under construction and while they did have a hand-carved mahogany door for sale, storing it on the boat would have been a bit of a challenge. 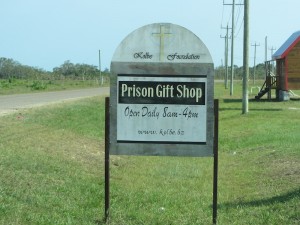 Yes, this is a real prison gift shop!

Instead of heading right back to Belize City, we went through Burrel Boom, a small town off the Northern Highway, not far from the airport and the rental car return.  A cute little town with a gas station and a post office, so we stopped to get more stamps, too.  Fueled and stamped, we returned the car, Mr. Elmer drove us, the windlass, a machete and some fruit back to the marina, ending our inland adventure in Belize.