I gotta keep working on the lettered animals if I’m gonna make it through the alphabet before we’re off the boat.

We did see some magnificent dolphins on our way to Ambergris Caye.

We left the beautiful Cayos Viverillo in the early afternoon. Soon after setting off, we were joined by a large, solitary dolphin. I think this was the largest dolphin we’d seen yet. 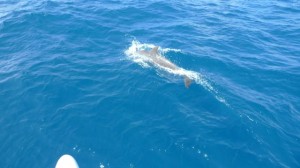 A large solitary dolphin joined us for a while soon after we left Cayos Viverillo.

The wind was too light and too easterly for a perfect sail. We sailed dead down wind for most of the trip. On Wednesday, we averaged about 3.5 knots, or at least it felt that slow. I rather enjoyed the slow, comfortable sailing — being able to cook and eat and read and shower as we bobbed along. Though, Pete found our slow pace frustrating.

Wednesday morning at ~8am, when Gayle and I were changing watch, we were joined by dozens of energetic grey and white dolphins who swam in and out of our bow wave. They stayed a long time: we got bored of them before they got bored of us. 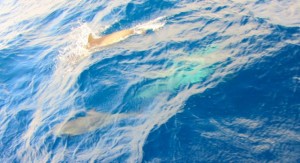 Dozens of little dolphins swam around the boat and played in our two bow waves.

Forget the bluebird of happiness and Wordsworth’s daffodils. I’m all about the dolphins of happiness. The sight of dolphins always cheers up a crew or makes a happy one still more glad. And, just remembering a visit from dolphins can put me in a better mood.

And F is for fish, but not a pet fish…
Thursday morning, I was wakened by a kerfuffle on deck. Soon Gayle called us to see the fish that she and Pete had just landed. It was a huge ocean barracuda (or wahoo). It was lying in the cockpit, flopping. Pete finally killed it by pouring some cheap rum onto its gills. 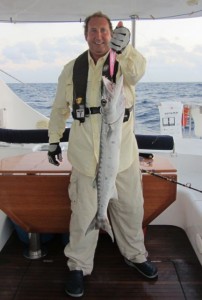 Pete and the big ocean barracuda.

We got some great eating out of that fish. A meal for the four of us and then seven nice steaks that the restaurant at Pat and Geoffrey’s VRBO cooked for us.

3 thoughts on “F is for Flipper”