…start with a littler fish.

Tony and Pete bought a seine net in Panama. Pete tried it out. Tony found a YouTube video on how to do it. Then Pete tried out the technique. 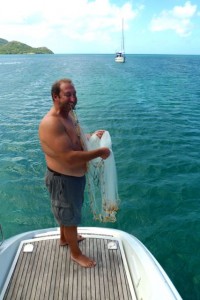 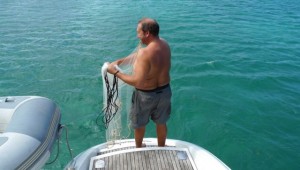 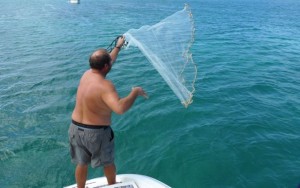 After a few attempts, he caught three nice bait fish. We kept them in salt water for most of the day. 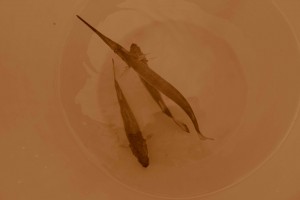 A needle fish and a couple of pals in the bucket.

The first little fish spent a number of hours on the end of a line off the boat. Towards sunset, I heard a big splash. When Pete brought the line in, there was nothing left — something took our little fish and the hook and snapped the line.

We tried again with the second little fish. We were sitting in the salon having drinks and chatting with our Dutch neighbours Dick and Petra when we heard the clicker go off. Pete had caught a lively reef shark. After a struggle, Pete got it off the hook and into the water. The little shark wasn’t much injured.

Pete, Gayle and the shark in the dark.

We didn’t eat this shark: Tony and I had seen this sign in a shop window in town. Though, we were subsequently told that these sharks are good eating. 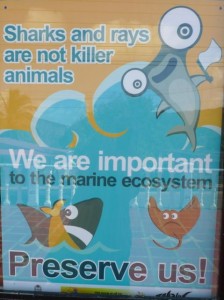 Some fishermen kill sharks and rays because these fish eat other fish and are thus competition for the fishermen.

January 31st: Technique was tried again. This time a needlefish was caught in the seine net and used to attract a beautiful snapper, which we are going to eat. Interesting, the needlefish survived — it attracted the snapper but was not eaten.

2 thoughts on “How to catch a bigger fish…”