Both islands belong to Colombia and are part of the same Colombian department but they are surprisingly different, especially given that they are only about 55 miles apart.

Interestingly, even though the islands are 55 miles apart, we sailed 119 nautical miles to get to one from the other. Providence is north and upwind from San Andrés. To our credit, we did sail most of the way — motoring less than 5 miles in total.

We left San Andrés mid-morning and arrived in Providence around the same time the next day. We stopped at Cayo Bolivar for about three hours on the first afternoon. There we lunched and snorkeled.

The statue at Cayo Bolivar.

The other island at Cayo Bolivar is inhabited but not as photogenic.

The water was beautiful. Here is Pete snorkeling.

Providence has a good natural harbour, and there were almost a dozen cruising boats in it when we arrived. The place has a very interesting history. It was found and founded by the English in 1628-30. The Providence Island Colony was similar to the Massachusetts Bay Colony which was founded around the same time. Both were financed by companies, expected to make a profit and settled by Puritans. The Providence Island Colony was anticipated to do better than the Massachusetts colony because of its superior climate. However, history (Spanish, pirates, and more) proved otherwise. Although, the island eventually came under Spanish rule, it was pretty much left on its own, and English is the predominant language except among the most recent arrivals and the officials — for example, the police and military who are shipped from the mainland to watch for narco-traffickers.

In Spanish, the island is called Providencia; but one of the locals told us that they prefer to use the English name of Providence (or Old Providence).

Our first sunset in Providence. 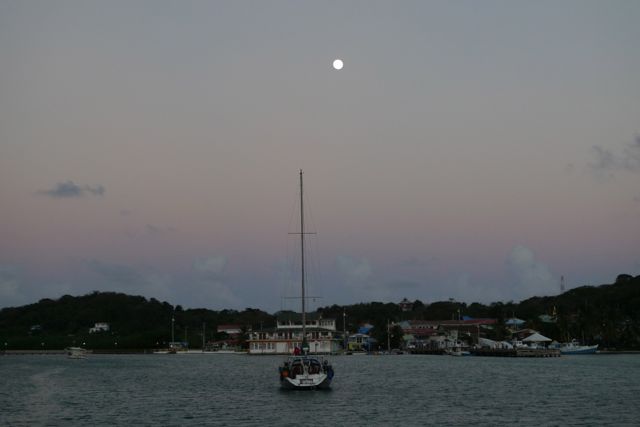 This is the view to the west immediately after sunset. The moon is well on the rise.

BTW: After we dropped anchor in Providence, Pete and Tony figured out what broke on the autopilot and were able to fix it.