We arrived in Deshaies around 8:30 am and dropped anchor. We hung out and had a lazy day: snorkeling, swimming, reading, interwebs, snacking, and chores.

We made two trips to the chandlery again today in our efforts to fix the starboard freshwater pump. (Maybe it is fixed now; I hope.)

We checked out of Gustavia around noon and set sail towards Guadaloupe. We had good wind for once — we sailed and pinched our way with only a very short tack to avoid Redonda.

When abeam of St. Kitts, we deployed our new drogue to see how it would work. It slowed the boat to around 4 knots.

We have decided that it is not so important after all that we get to Grenada by June 30th. Maybe we’ll stop in Guadaloupe for a few days before we go to Grenada.

We took a break from beating our way towards St Barth’s and stopped at Anegada for the day.

Beating our way towards St Barth’s.

Assorted shopping trips and boat work. On Friday the parts we were waiting for from Florida finally arrived (a week late). We set sail towards St Bart’s late Friday afternoon.

We (Gayle) drove to Fajardo (100 km) where we shopped at West Marine and the Skipper shop. We did break for a tasty Cuban lunch.

In Caguas, we did a huge Costco shop. It was midnight by the time we got back to the boat and everything was stowed and processed. Tony bought a whole fillet and cut it into filet mignon, chateaubriand, chain steak, and kebab chunks (plus scraos for the feral cats who live around the marina).

Gayle, Pete, Tony and Paul went to San Juan, stopping for spit roast pork at a lechonera on route.

A principal goal for the day was to shop at the West Marine store; however, it was closed for Father’s Day, as was Sears. (No last minute gifts for dads from either of those establishments.)

Paul is staying in San Juan tonight and flying back to San Diego tomorrow. Boo, sniff, we’ll sure miss him; it was great to have him with us. But I’m sure Z. will be happy to have him home again.

We had a day of errands in our blue Taurus rental car.

We were later than we should have been to up anchor. The 20 kt wind was against us the whole way. If we’d had lots of time, we could have had a sailing day with a series of tacks, but as it was we motored and motor/sailed it — ugh! However, we did get to the dock of the Ponce Yacht and Fishing Club by 3:20 pm. This gave Gayle and Jane time to pick up the rental car before the office closed for the weekend at 4:30. [A shout-out for Ray at Hertz who was just awesome, picking us up at the marina and getting us squared away with the car.]

Friday night found us with the ponceños, at La Guancha, a boardwalk with music and food kiosks and drinks. It was a fun night: we visited four kiosks and sampled different things at each. Our favourite was the Argentinian one, called Tango.

Thursday June 14th: Boqueron to La Parguera, (with a side trip to Mayaguez) Puerto Rico (map)

We got a variety of stories about what we needed to do to check into Puerto Rico: Pete (skipper) could go in alone with the papers to Ponce; then at 9 pm, we got a call from the customs to say that Pete had to go to Mayaguez; then at 8:00 am, we learned that the whole crew had to be in Mayaguez before 9 am. We rallied and called the cab driver and made it by ~9:12 am. Good enough.

After our customs adventure, we headed off to La Parguera — a big bay, dotted with little mangrove islands and protected by a reef. It’s a weekend get-away place for Puerto Ricans. (Pete compared it to the Jersey Shore.) We swam, snorkeled, dove according to our proclivities.

In the evening, Pete, Paul and Tony investigated phosphorescent bay, which they reported a very cool and quite different from bioluminescent bay.

We dropped anchor in the bay and really enjoyed our swims and deck showers. In the early evening we went ashore, ate a few oysters and clams from a street kiosk and then got a cab up the coast to dinner — a very typical Puerto Rican dinner heavily featuring fresh fish and seafood, plantains and yucca in a variety of preparations.

We spent four days at sea doing the passage from Turks and Caicos to Puerto Rico. We sailed for the first three days – using our diesel to charge batteries and make water. We sailed and tacked a lot because the wind was generally from the south east and we were headed south east. The final tally was well over 500 miles through the water.

This time our watch schedule was four hours at night and six hours during the day, with two people per watch — except for the 2 pm to 8 pm watch when we had three people.

We left Grand Turk (and the interwebs) in the early afternoon and enjoyed a perfect sail south to Big Sand Cay. This is my favourite anchorage to date: a deserted island with beautiful white sand and we had it all to ourselves.

We sailed (in a series of tacks) from Cockburn Harbour to Government dock in Grand Turk. We had diesel delivered by tanker truck to the dock — it was good service after 5 pm on a Friday afternoon.

We spent the day in Cockburn Harbour. In the afternoon, we had lunch, checked out town and did a little grocery shopping.

We were off the mooring ball soon after 6 am for our 12-hour trip to South Caicos. It was nice sailing at the start and nice sailing at the end and horrible motoring straight into wind for 5+ hours in the middle (with 2/5ths of the crew suffering mal de mer).

We had a pleasant evening at anchor in Cockburn Harbour: Pete and Paul went snorkelling, Jane and Gayle swam off the boat, and Tony did a night dive to look for mating glow worms.

More dives (Tony) and snorkelling (Pete, Gayle, Jane). We moved from mooring ball to anchorage and back. On Tuesday afternoon, Tony took the dinghy to the Sharkbite restaurant in Turtle Cove and picked up Paul J who arrived from San Diego.

We left the marina in the early afternoon and motored to the west end of the island. Tony did a couple of scuba dives and the rest of us enjoyed a fine snorkel.

We spent a couple of nights at a marina after arriving at Turks and Caicos. The marina called for a customs and immigration officer to come to the boat to check us in: very convenient. Gayle did an amazing job cleaning the deck with our power washer and the marina’s fresh water. And, we all enjoyed a land shower or two. 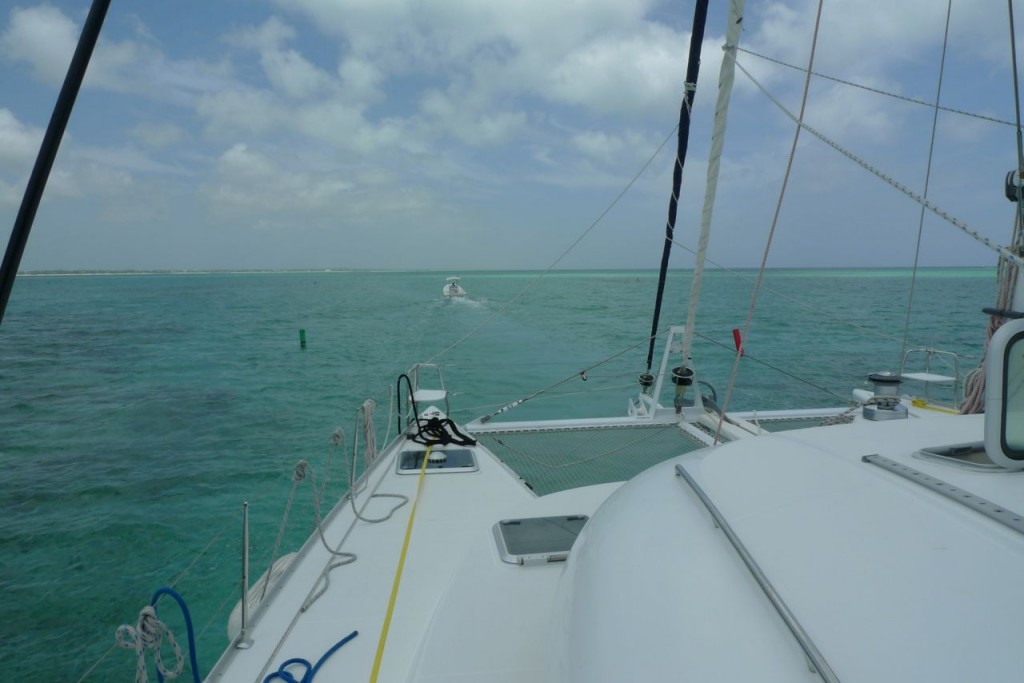 Following the guide boat through the reef into Turtle Cove Marina. 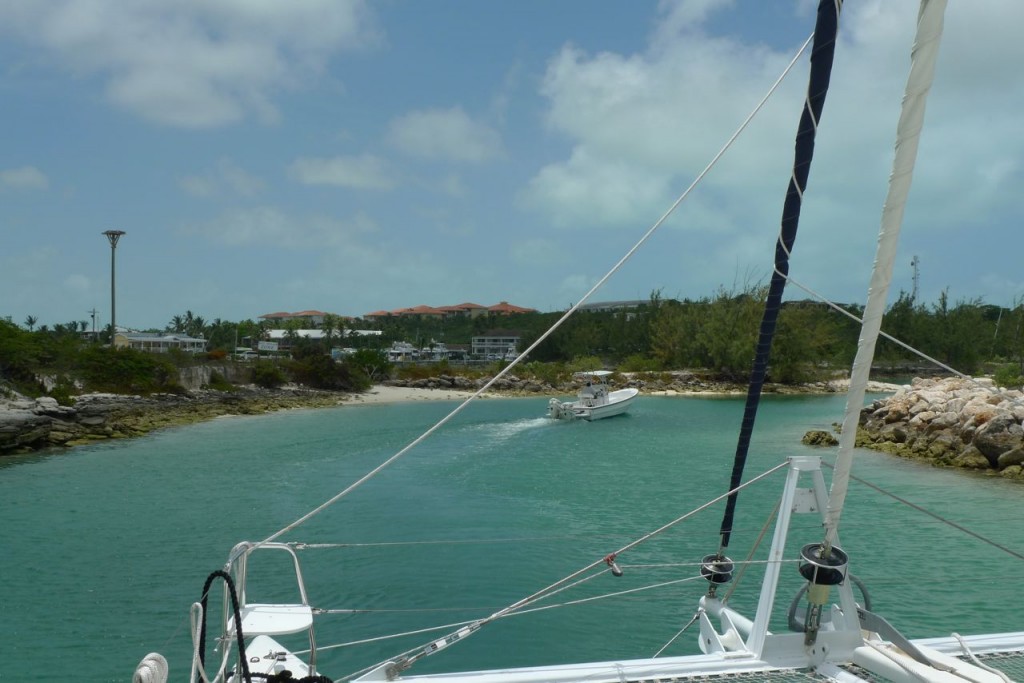 Almost in the marina now.