We motored some and sailed some down the east coast of Grenada to the main port, where we took a slip in the fancy Port Louis Marina. (We plan to stay here until Wednesday, August 1st.)

We sailed 10.2 nautical miles to Sandy Island, a deserted island off the north west coast of Grenada. The winds were a light and we had to do some tacking but it was a nice sail.

We motored slowly with the fishing line out from Halifax Harbour to David Bay in the north (another deserted anchorage, this one a little rolly).

A very beautiful and deserted anchorage next to the dump (but maybe they don’t still use that dump — it didn’t smell).

After a spell at the Phare Bleu dock for Brett to fix our propellor problems, we sailed off to Morne Rouge bay. This was the first night since June 9th that we had an anchorage all to ourselves. It’s a pretty place, but also pretty shallow; if we drafted more we wouldn’t be here.

After more than two weeks at the lovely Phare Bleu marina, we decided it was time to leave the dock for a change of scenery. We motored to Mount Hartman Bay and anchored off Secret Harbour Marina.

At the dock at the Phare Bleu marina. We expect to be here for a while working on the boat and (I hope) doing a little sightseeing.

Our first full day in Grenada. We rented a car and began work on our list of tasks. The first priority was picking up our new heads (marine toilets) from the DHL office.

We had a pleasant 40 mile sail from Tyrell Bay to Le Phare Bleu marina in Calivigny Bay, Grenada. We tried sailing downwind with the gennaker and jib both out. 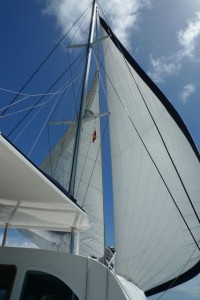 On Delay sails in butterfly configuration (jib on left and gennaker on right).

We got a nice welcome from Le Phare Bleu marina including help tying up at the dock and the loan of an extension cable so we could get shore power. Pete and Gayle tried out the pool, and Jane took a swim from the beach.

Phase 2 of our adventure (getting to Grenada) is complete. Phase 3 (working on the boat to fix the issues we discovered in our 2700 nautical miles) is about to begin.

Spending the day at Tyrell Bay. 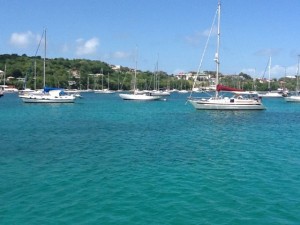 We are surrounded by anchored boats in Tyrell Bay… 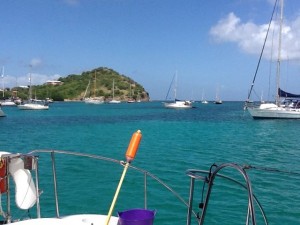 …cruising boats in every direction.

We had a slow morning and arrived at the immigration office at one minute past twelve. (The office is closed for lunch from noon to 1 pm.) So, we went off to lunch at the “Jerk Centre” for a classic Caribbean lunch of jerk chicken, jerk pork, rice-and-beans, and potato salad. In the afternoon, the immigration officers gave us a hard time for checking in so late; threatened to fine us next time!

Hillsborough has a certain charm, a good number of little grocery stores, a nice co-op fish market (fresh snapper on the BBQ), and many rum shops (bars).

In the late afternoon, we motored to Tyrell Bay and anchored for the night. Tyrell Bay is cruisers-central. We are in an anchorage with about 50 other cruising boats and more in the yacht club marina.

28-hour sail from Les Saintes to Hillsborough. We sailed the whole way without a single tack and left our double-reefed main in the whole time. Very nice.
We dropped anchor in Hillborough Bay and celebrated with a little fizz because we are now far enough south to be insured in the case of a named storm.

We spent the morning still at anchor in Les Saintes. Gayle and I went in for our laundry at 9:30 am – it still wasn’t dry. We consoled ourselves by buying a rotisserie chicken and 100 grammes of the-best-rillettes-de-canard from the butcher.
Tony and I picked up the laundry at noon along with bagettes to accompany the chicken for our pre-departure lunch. After lunch, we set sail.

Spending a day here. Getting laundry done, a little shopping, a walk to the beach and a snorkel.

We had battery problems this morning. We couldn’t start the engine from either the house or the emergency batteries 🙁 We fired up the generator to get the engine started and the boat systems working.

We sailed close hauled with lots of tacking to Les Saintes. I’ve been here five times now but this is the first time that we’ve moored in town (instead of around the back in Marigot Bay) — one advantage of being here in off season.

From a sign in town, we found “Philippe a Voile” who met us at the dinghy dock and agreed to repair our ripped jib overnight.

The jib fairlead block was about to detach from the car so we sailed the 10 miles south on main sail alone while Pete and Gayle repaired the car with Spectra. We anchored off Malendure and took the dinghy to the Jacques Cousteau marine park at Pigeon Island. We had very nice snorkels and dives. In the late afternoon we went ashore to the beach. It was a popular place on a Sunday afternoon. We ate hand-churned ice cream from one of the beach vendors.

Not a lot else was open beyond the beach; most of the restaurants were closed either for slow season or for Sunday.