We used to refer to ourselves sometimes as “boat people”. I probably won’t do that again having just seen some real boat people.

Tony and I were going ashore by dinghy: I looked up and in front of us anchored just off shore was an open boat full of people. Most of them seemed to be standing — there was little sitting down space and no lying-down space. Immediately, I knew they were escaping Cubans. They asked us (in English) where we were from and Tony replied England. We asked if they wanted us to call someone, and they said yes.

We drove to the government administration building down the road and told them that there was a boat full of Cubans anchored at Stake Bay — and the government said yes, they already knew.

We then drove to the grocery store for a whirlwind shop: What does one buy for a boat-load of refugees? We settled for jugs of water, cans of coke, Vienna sausages and sardines. We wanted to make sure that we got back to Stake Bay before the Caymanian authorities moved the Cuban boat on.

We’d already heard that Caymanian law forbids Caymanians from giving assistance to Cuban refugees. Caymanians who told us about the law certainly disapproved of it — saying how can we deny these people food and water. If the Cubans set foot on Caymanian soil, they get repatriated back to Cuba — which explains why they were anchored off a few yards from the dinghy dock. 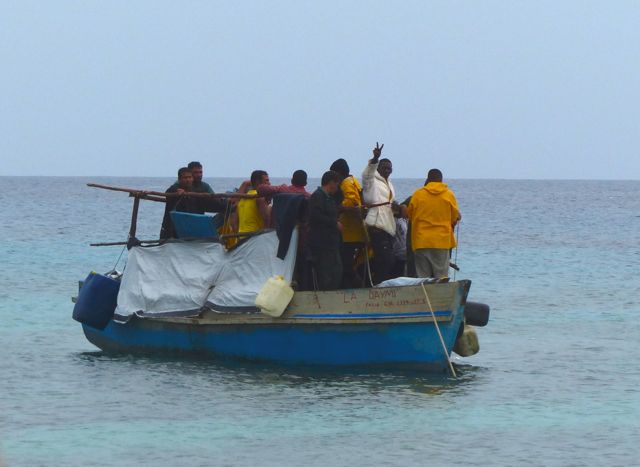 A boat full of Cubans.

We got back to the Cuban boat with our grocery gifts before they moved (or were moved) on. Tony and I returned to On Delay and gathered some power bars (Thank you to Cindy, Kathy, Margaret, and Kathleen) and US cash as additional supplies. By then, our Cubans were on the move, so Tony took the dinghy to catch up to them. He reported that they couldn’t slow their engine to help him catch up. Presumably, the engine had only one speed.

We later heard that there were 19 people on board and that they were heading to Honduras, 400 some miles in open sea.

After making his delivery, the dinghy motor stopped. Tony Day had to row back to On Delay and then clean and rebuild the carburetor again.

Tony rows back to On Delay after the outboard on the dinghy fails. 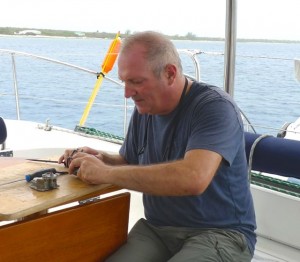 I sure hope that the Cubans’ motor holds up, and their spirits too, which appeared high when we waved them off.

7 thoughts on “Another sort of boat people”