The Entire Fleet – They are a crafty bunch!

The weekend started off easy enough. On Saturday, the crew of Invincible enjoyed some quality boat time with a neighboring boat where the would-be racers developed a “need for speed.” Come Sunday, our marina had the makings of a boat building fleet, so the crew of On Delay, complete with a racing guru, enticed all to join us for a race!

Initially, we discussed which rules best applied to our regatta, IRC or PHRF, we opted for a hybrid of IRC and PHRF with consideration for unmanned vessels, since there wasn’t a rudder in the fleet. Key rule modifications including automatic DNF for physical violence or crying were strictly enforced. 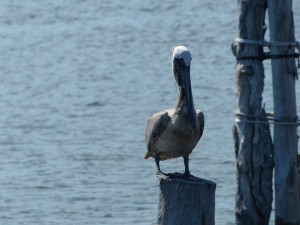 Even the Peanut Gallery had an opinion.

Builders had until Monday at 3 pm. A collection of individuals from our very own marina (including some semi-pros), served as our race officials: 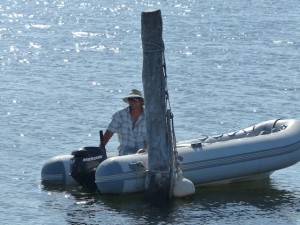 Sun Protection and a Beer. 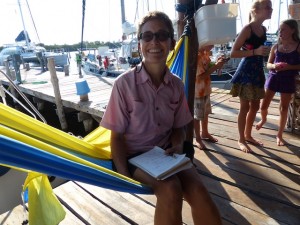 Every serious official has time for a smile!

Entrants, on floats, were allowed to trail their boats and readjust heading without advancing boats along the coarse. Officials paid careful attention. Each racer created a sailboat, using their very own design, which was required to be water-ready at race time. 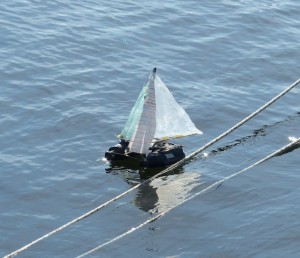 There She Blows – Black Pearl fills with wind! 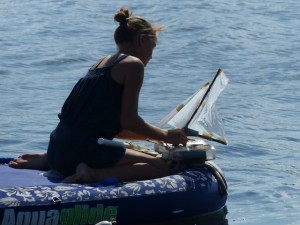 Sometimes modifications happened during the heats. 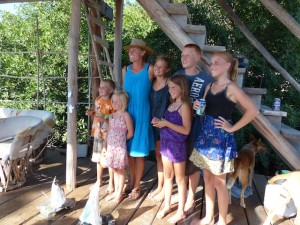 Our Cast of Racers

The final race consisted of all boats in the water, no human assistance and our race official at the finish line calling the winner. You can imagine our surprise at the end when we discovered that the “grown up” contingent failed to place any wagers on the outcome, but instead, at the awards ceremony, enjoyed adult beverages (for those over 18) with candy and toys for the under 18 set.

Our very first community racing experience, in addition to our first community marina experience, and what a success! No bloody noses, no overwhelming sadness, just a whole bunch of happy people enjoying a beautiful day in the inlet with some good old fashioned racing. We are pleased to announce that all boats finished. 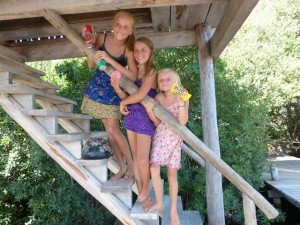 2 thoughts on “A Little Healthy Competition”