The floating island, viewed from On Delay in the marina.

We were fortunate to arrive at the island at the same time that the island’s charming owner/creator/mastermind, Richart Sowa was showing it to a Chinese film crew. We were invited to tag along. Perhaps our faces will appear on Chinese TV. I wonder what the Chinese will make of it. Richart is delightfully eccentric with a spiritual bent: telling the TV crew of seeing a space ship and of his investigations into assorted religions from Jehovah Witnesses to Buddism. 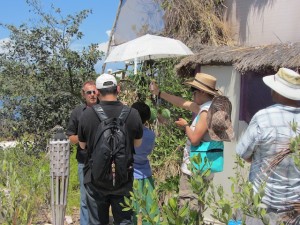 Richart is filmed for Chinese television.

The island is made from reclaimed materials. It floats on thousands of plastic bottles, held at first in net bags and then, as time goes by, by the roots of the mangrove and other plants that grow on the island and also by corals growing on the bottles. The center of the island is the oldest and feels quite solid. The edges are newer and less robust — at the edges, we were advised to stand at least a meter apart so that we didn’t sink.

There are holes (usually covered) in the island; these are access points for more bottles.

A hole for adding bottles. Richart uses a long stick to push the bottles towards the center of the island.

A small boat made from scrap materials is used to ferry (hand-over-hand along a rope) visitors to the island. We arrived on our own (rather more seaworthy) dinghy. 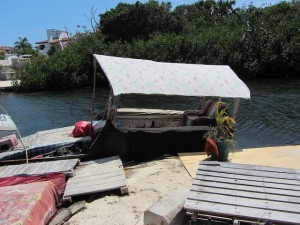 A covered ferry travels the hundred yards between the “main land” and the island.

Energy and water come from the sky. There are solar panels to supply electricity. Rainwater is gathered on the roof and used for washing and showers. (The toilet is composting.) 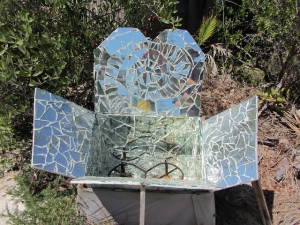 The solar oven is work of art. 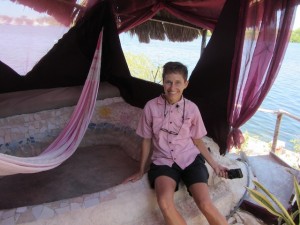 Jane at the edge of the roof-deck pool. Also used to store water in the rainy season.

The house itself is delightfully whimsical. 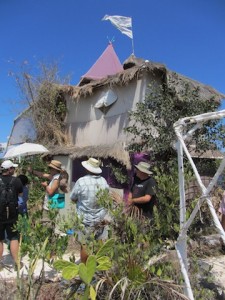 Looking at the house from the edge of the island. 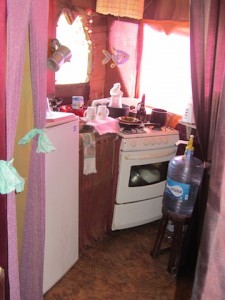 The next floor is the guest quarters. The guest bed is quite charming. The ready-installed “ShellTell” allows guests to chat from their bedside to the ground floor below. Yes, it really works. 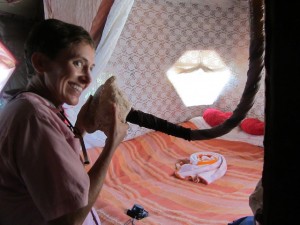 Jane chats with Richart on the ShellTell.

We really enjoyed our visit to the floating island. We thank Richart for the tour; it was an honour and a pleasure to meet the man whose passion and ingenuity created such a unique place.

Should you be interested in some of Richart’s writing, be sure to follow him on Facebook, where with a simple “like”, friends are offered the opportunity to learn more about his discovery of higher powers and the development of the floating island.  Updates about the island growth can also be found by clicking here. Also of note is that Richart has raised some money for his floating island via KickStarter.

2 thoughts on “Floating islands, not just for dessert”