Hard work on the hard at Isla Mujeres marina.

We’re happy with the new bottom paint. We chose black paint instead of blue. When the black starts to wear, we’ll see the original blue underneath. That will help us gauge when it’s time to repaint again. 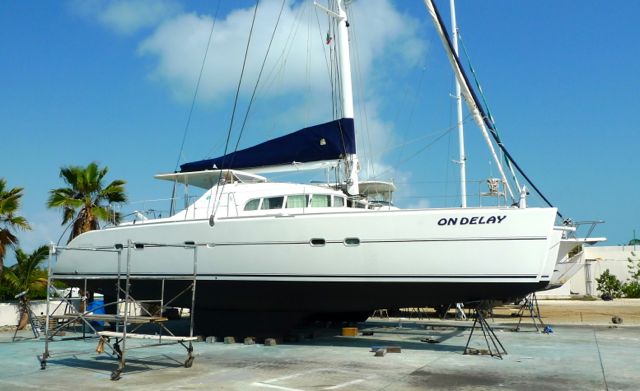 While on the hard, Tony and Pete tackled some projects that were easier to do on land.

Tony-the-teak-guy fixed some caulking on the sugar scoops and then re-sanded and treated them. This couldn’t be done while in the water — the lower step was always damp. 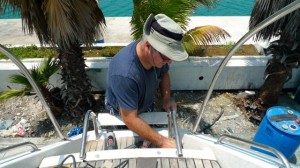 Tony works on the teak — port side. 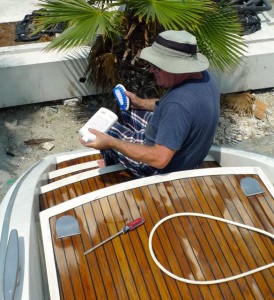 Tony works on the teak — starboard side. 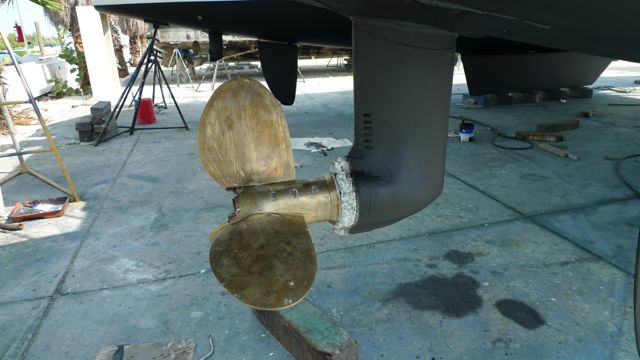 Propellors, shiny after their vinegar bath.

The guys had a surprise when the boat went back into the water on Tuesday: On Delay went backwards in forward gear and forward in reverse gear. It turns out our shaft was set with the less usual left-hand rotation, and we set our feathering props for right-hand rotation. The next day, after being hauled again, it took 45 minutes for Tony and Pete to fix the problem. Too bad we got charged for the second haul-out; but I doubt that we’ll make that prop mistake again.

Very important: We had our go-faster stripes touched up. Jesús and his assistant did an exceptionally nice job refreshing our stripes. The improvement makes the boat look newer.

But, it hasn’t been all work. We’ve enjoyed living in our studio apartments in a non-touristy part of the island. We patronized some local restaurants and cooked some tasty meals in the kitchens and got to know some other cruisers and ex-pats.

Pete and Tony try out the swings at the dock where we keep the dinghy.

6 thoughts on “Getting off the hard is hard”