— Here’s a post that has been languishing in “drafts”. It’s a few pictures from my sister’s visit.  (The second sibling visit will be posted soon.)

My sister, Eli, was the first sibling to visit us on On Delay. It was extra special to have family aboard.

The cayes of Belize have a lovely laid-back Caribbean feel. We spent some time inside the barrier reef on Ambergris Caye and Caye Caulker, as well as visiting the atolls outside the reef (Turneffe and Lighthouse — home of the famous Blue Hole dive site). There are only four atolls in the northern hemisphere and three of them are in Belize (the fourth is in Mexico a few miles north).

Here are some of my favourite photos from her visit. 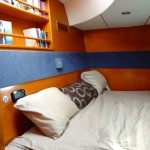 A street scene in San Pedro, Ambergris Caye, where the adventure begins. 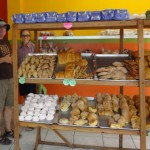 Provisioning at the bread store. 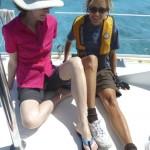 First day on the boat. Which sister has the healthy tan? 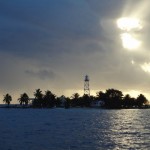 English Caye. The cruising guide said we would be welcomed by the lighthouse keeper. When we approached in the dinghy, fierce dogs barked at us from the dock and a woman on shore told us it was not okay to land. We didn’t land. 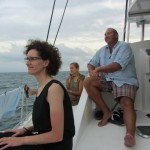 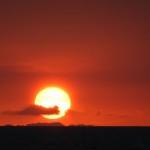 We did see some pretty sunsets. 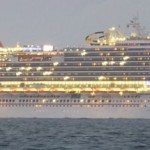 Here is a cruise ship at sunset. We kept our distance — they are huge. 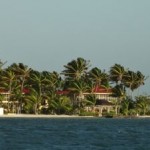 The snooty resort at Turneffe reef. They didn’t let us land our dinghy either. This is where we anchored (and dragged — twice). It was scary. 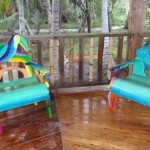 The resort at Long Caye. They did let us land and were super nice: for example, opening the bar just for us, and setting up a private Blue Hole dive for Pete and Tony. 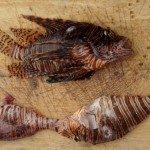 Pete speared us some yummy lion fish in Belize. Lion fish are an invasive species. 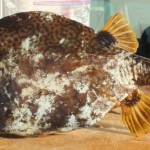 Pete also caught a trunkfish. It’s a crazy fish with a triangular body and a hard shell. The meat tastes like chicken and the liver, like foie gras. 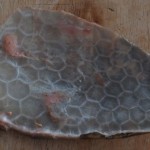 A piece of the trunkfish’s honeycomb armor. The armor has holes in it for the fins and tail to stick out (like a boxy Halloween costume). 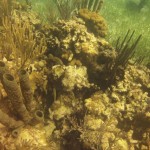 We found a nice shallow snorkel spot near our anchorage at Lighthouse reef. 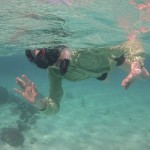 Hello and goodbye from Eli underwater.