We were all quite fascinated by the island of South Caicos. It was once a very prosperous little place.

South Caicos was the main export point for the local salt industry.

We read that the salt was exported to Nova Scotia. Presumably, to salt the cod to ship back to the Caribbean to feed the plantation workers/slaves who worked the cane fields to make the sugar that made the rum and molasses that got shipped north again. 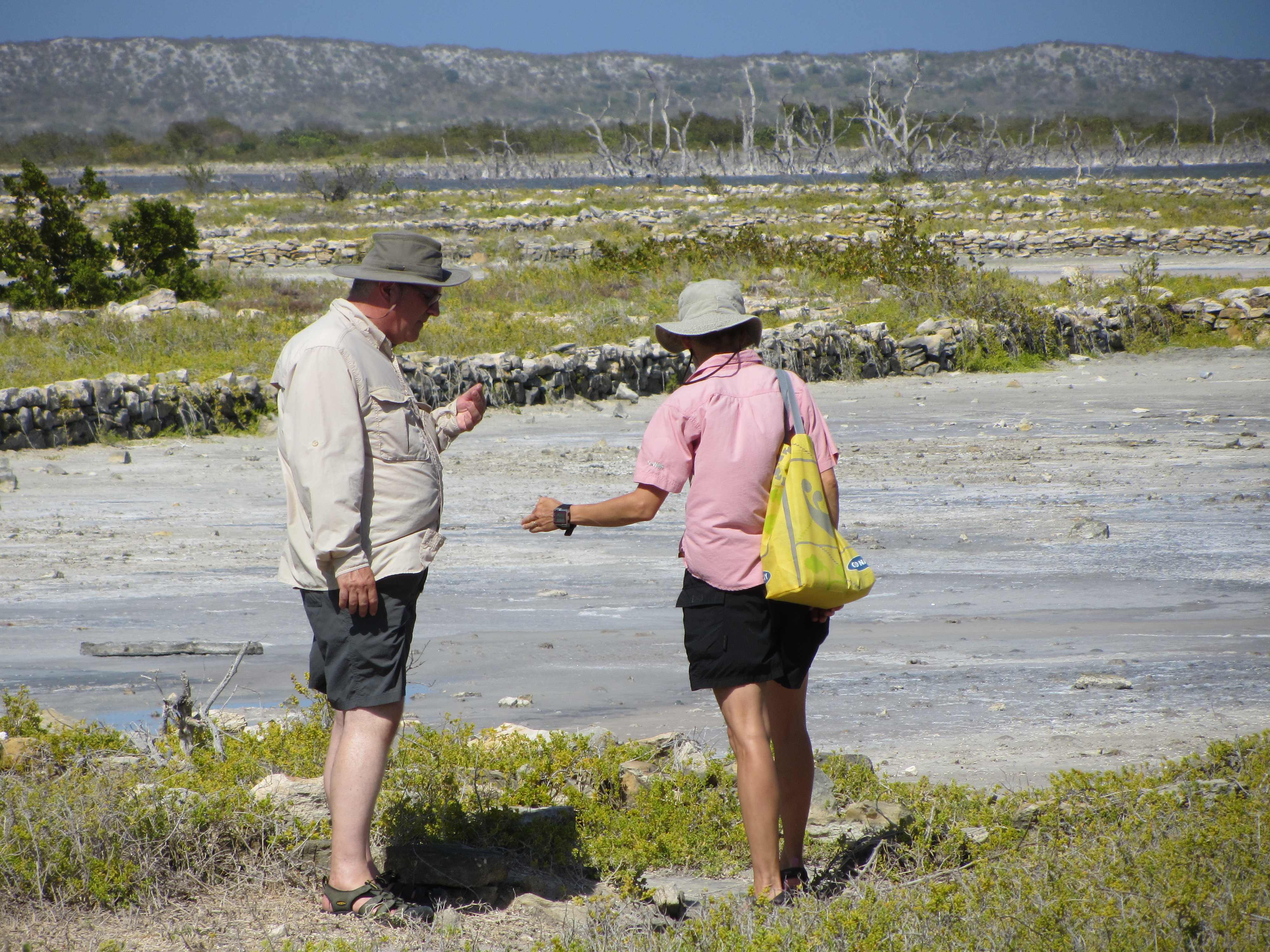 Tony and Jane collecting salt from the pond. 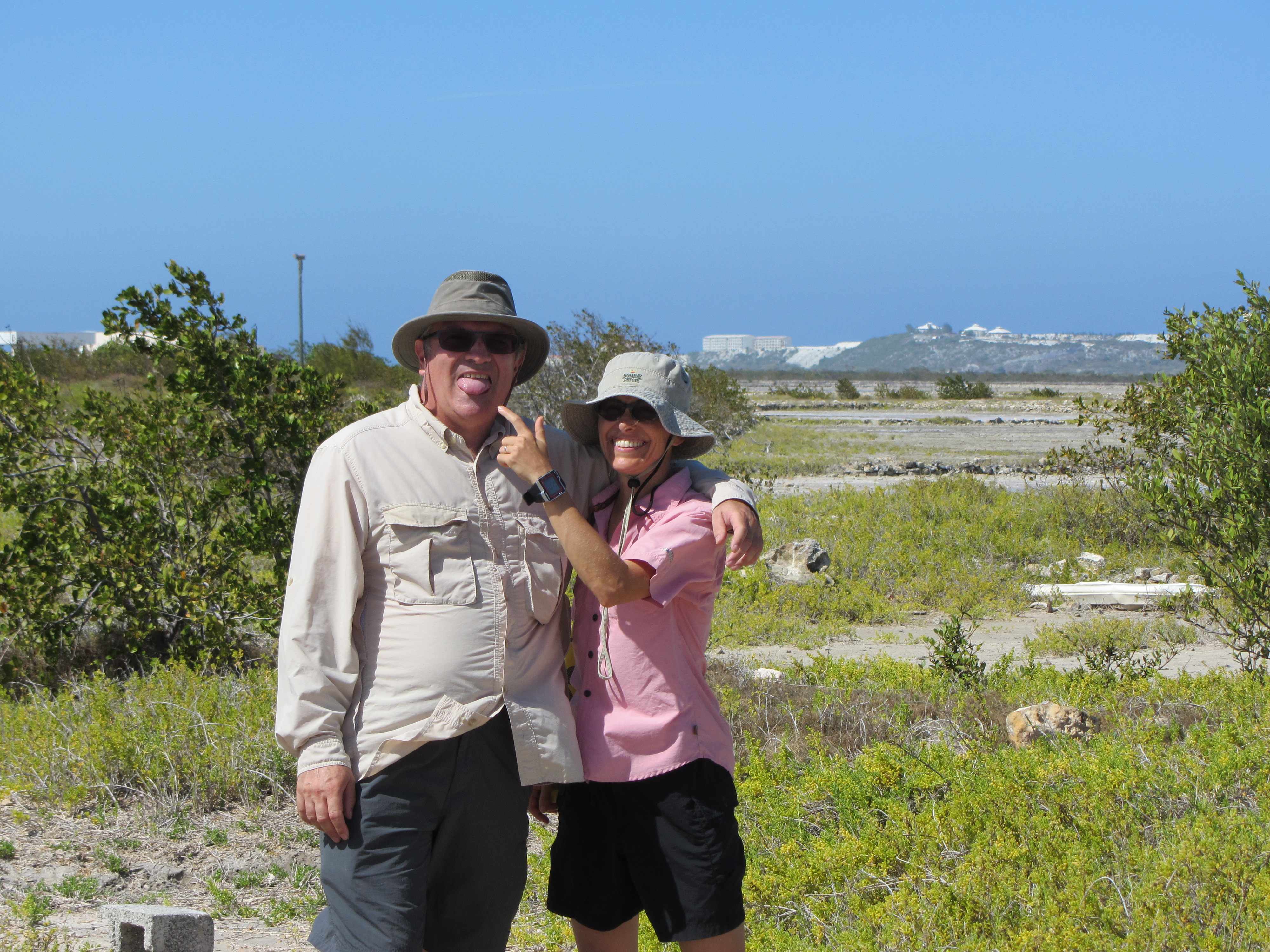 One part of town had become a ghost town. Houses, shops and even a church were boarded up or in ruins. There were a few really old substantial stone buildings also in ruins.  And, nearly all the buildings had solid stone walls around them, suggesting past grandeur. 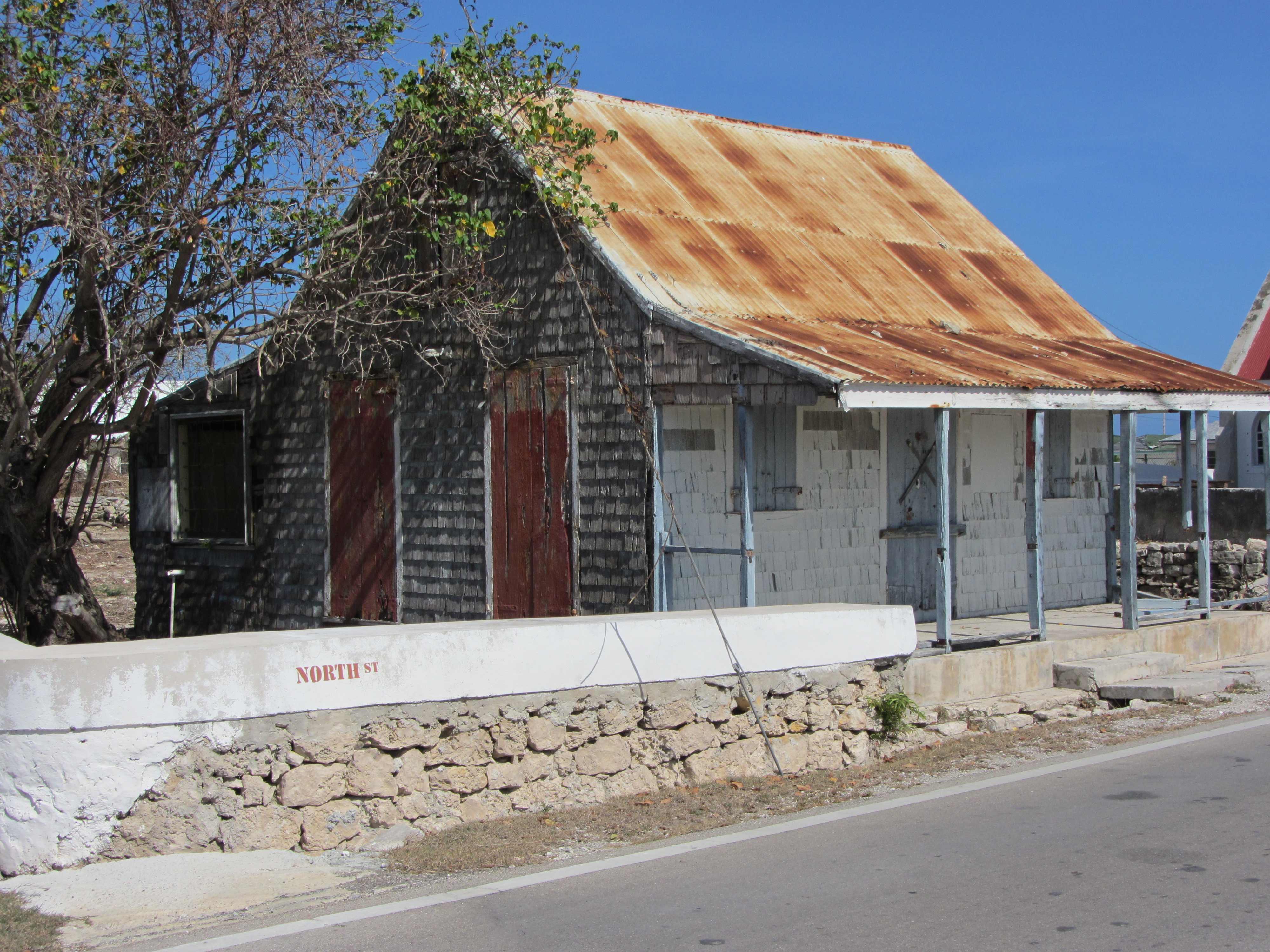 A boarded up shop on North St. Most of the low stone walls had been recently capped and whitewashed and stencilled with the street names.

Another abandoned building on South Caicos.

An old stone warehouse in ruins.

I particularly noticed this floor of a little house – none of the walls remained but the flooring was still there. I could make out the various rooms and four layers of linoleum tiles. (The linoleum layering reminded me of some SPAF projects.) 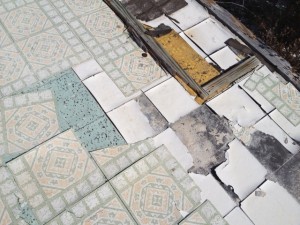 The remains of a kitchen floor in a small house. There were no walls, just the floor.

The town currently has three fish processing plants – though they were all closed the day we were there because of bad weather. I hope that explained the number of men who were just hanging out, playing dominos, etc. Paul, Tony and I visited all three processing plants in the hope of getting some fresh fish for dinner.

It was a hot hot day. The waitress at our lunch spot complained of the heat. The people we saw out were mostly sitting in the shade. We came across a group of horses standing in a paddock, and they were standing so motionless that the scene looked like a staged tableau and not real life. (My crew mates with more vivid imaginations decided that all the horses were possessed and that South Caicos would be the ideal location for a Stephen King novel and film. ) 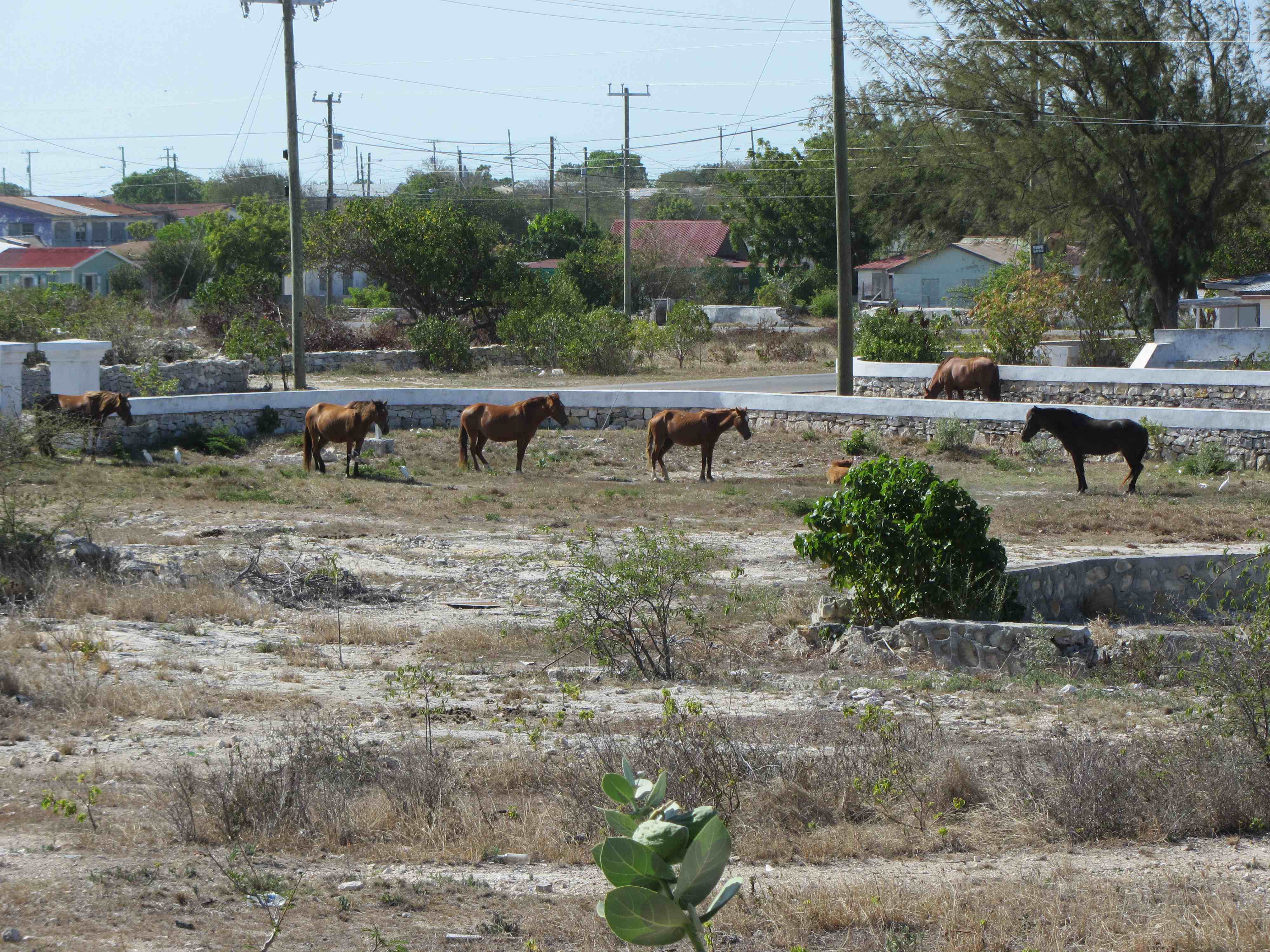 Horses in an open paddock on a very hot afternoon in South Caicos. 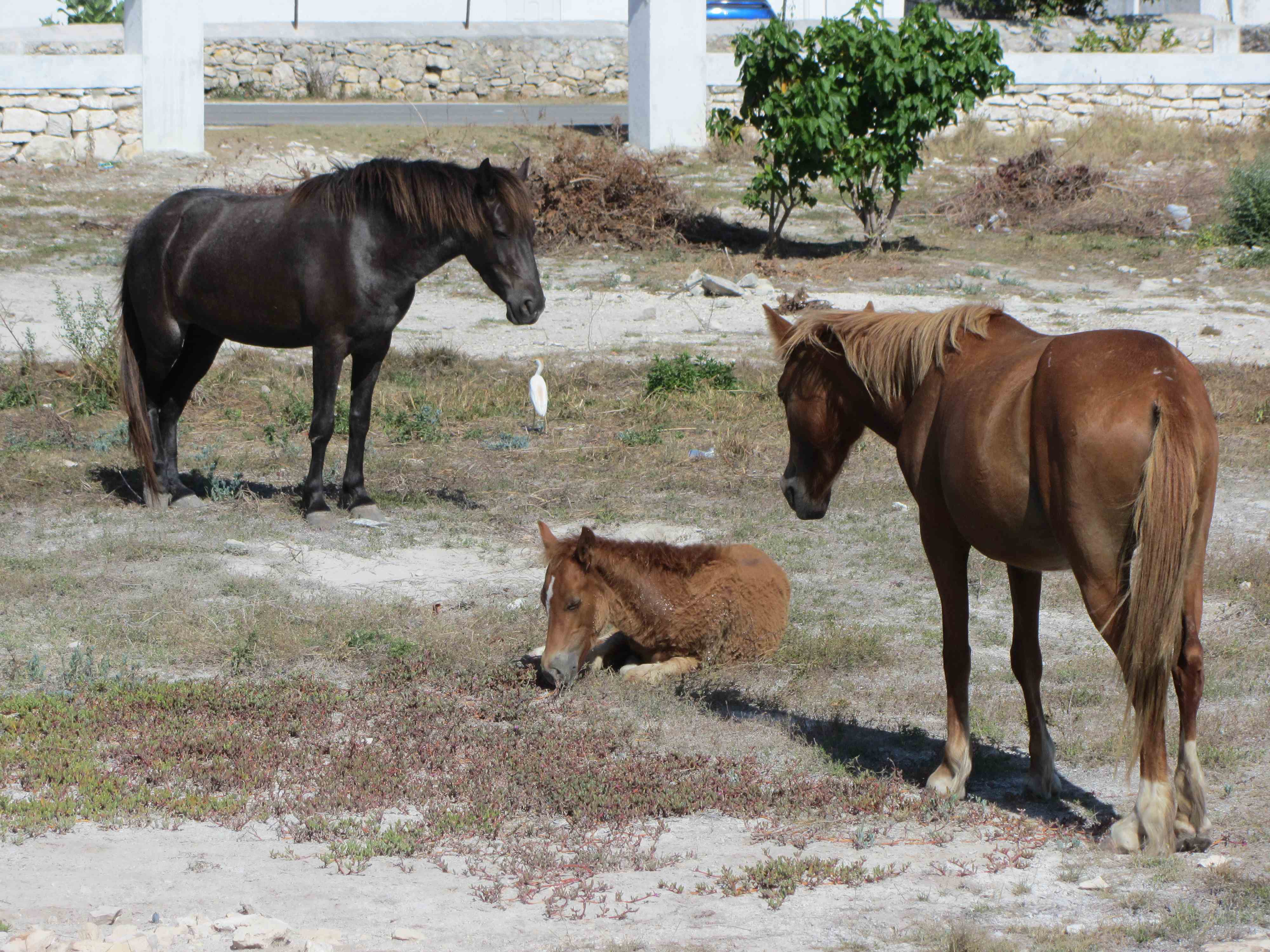 Horses with colt on a very hot afternoon.

We had a tasty, typical lunch at the restaurant overlooking the harbour.

When a policeman stopped at the restaurant, Gayle asked him about customs and immigration for checking out of Turks & Caicos. He sent a customs agent to the restaurant, so that just as we were finishing lunch, the customs agent arrived and we were able to complete the whole checkout process at the now-cleared lunch table on the veranda of the restaurant – what fine service!  (And what a contrast to our check-in later in Puerto Rico … but that’s another story.)

3 thoughts on “An afternoon in South Caicos”