We left Bocas del Toro on Saturday afternoon and dropped anchor off San Andrés on Monday morning. We sailed through two nights and one full day.

San Andrés is an island that belongs to Colombia even though it is far from Colombia and closest to Nicaragua. (It has been in the news recently because of an ICJ ruling.)

We’d been watching for a “weather window” to make the trip. The distance wasn’t all that far (~200 miles), but the forecasts for the winds and seas had not been auspicious for a while: with high seas and high winds. In our crossing, we had some moderate swells (~10 ft) and variable wind: we sailed double reefed and single reefed and no reef and motored — all mixed up.

On Sunday morning, we saw dolphins galore. I wonder if the dolphins don’t get many boats in that area because they came from all over to play in our bow wave. We must have seen about 50 individuals over the course of an hour and half. They’d play for a while and swim off, then another pod would appear. I wonder if they told each other about us. 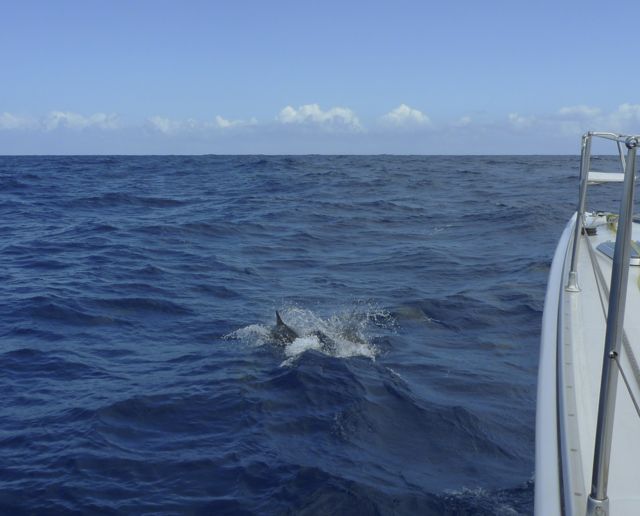 Dolphins on our way to San Andres, Colombia.

It was around new moon so the nights were very dark — and the marine phosphorescence, On Delay’s bow wave and her wake sparkled with thousands of little points of light.

We arrived off the coast of San Andrés just before dawn. We dawdled a little, hove to, until it was light enough to make our way up the channel to the anchorage off town at the northeast corner of the island.

We contacted the local agent who helps cruisers check-in, and by 10:30 am we were processed. When I got back to the boat, I took down the yellow Q-for-quartantine flag that we’d put up when we arrived in Colombian waters and replaced it with the Colombian flag.

Down comes the Q flag and up goes the Colombian flag.

I also put up the new American flag that Pete and Gayle brought back from the US in December. Our old one was huge and so tatty that we’d stopped flying it. I like this one. Thanks Pete and Gayle! 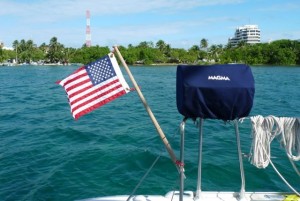 Nothing says ‘merican like a bright Old Glory next to the BBQ.

And now off to explore a new island…

Here are two of the pretty photos that Laura mentions in her comment below. Thanks Laura! 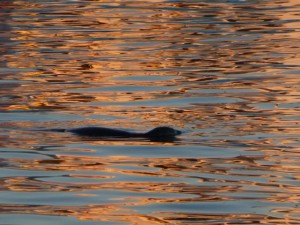 A seal off Sausalito, California. (Photo by Laura B.) 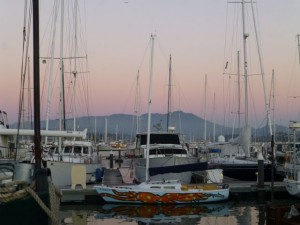 Boats in Sausalito, California. (Photo by Laura B.)