I think of all the cups of coffee I have drunk in my life, and only now have I visited a coffee plantation. I’ll never complain again about the price of coffee beans: I have seen work and processing that goes into producing my cup of joe. 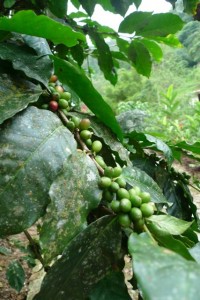 The coffee beans on the tree. The beans turn red when they are ripe and are picked between December and February.

We got a good driver with a Land Rover for the day. It sat seven of us: one shotgun, three in the back and three in the way-back. It was a good car for the rough, steep and severely potholed roads that we encountered that day.

We drove up, up, up, from sea level to the La Victoria organic coffee plantation in Minca, one of Colombia’s first coffee growing regions. The Land Rover was equipped with an altimeter and it registered over 1000 m (~3,200 ft) at the high point of the day.

La Victoria coffee plantation was established in 1892 by a couple of Englishmen. It is still going, mostly with the same equipment. The main processing area is situated on a river so that much of the equipment is powered by water.

Here is the Land Rover and the river. We drove through the river to get to that parking place.

It was fun to see “San Francisco” on the turbine equipment. It’s been a while since stuff like this was made in San Francisco. 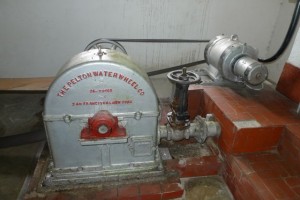 Water is the primary energy source for the coffee processing.

Everything was belt driven. 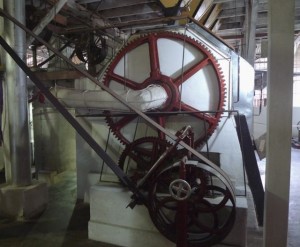 Belt driven equipment. This is the drying machine.

The workshop that they use to maintain this old equipment was equally impressive. (They don’t get replacement parts from London, New York or San Francisco anymore.) 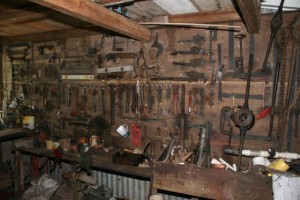 Here is the workshop. Nearby they had a huge stack of leather belts, ready to replace the ones in use.

More crazy old equipment. Everything was very ingeniously and efficiently designed — attested to by the fact that it is still in use over a century later. 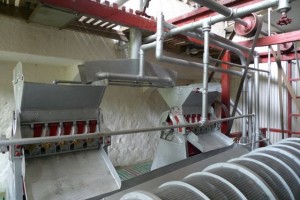 Sorting equipment: lots of use of water and gravity to move the beans around.

I thought that Felipe was kidding around when he appeared to have a conversation on this phone. But, in fact, he was talking to a guy at one of the (17) picking stations higher up the mountain. 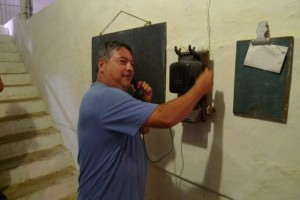 Felipe was as surprised as we when someone answered this phone.

We finished the tour in the (still under construction) tasting room. It was a really good tour: delivered by Jaime and translated by Felipe. (I bet she didn’t know that a chemical engineer was translating for her.) La Victoria has only been giving tours since last December, but already 1800 people have been through. At the tasting room, we bought coffee (of course), souvenir sacks, and honey made by the bees that pollinate the coffee trees. (I’ll let you know if the honey tastes like coffee :))

Felipe, Jaime and Tony in the tasting room. 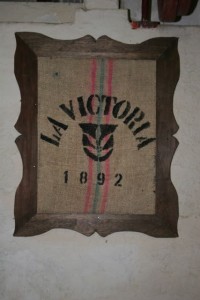