August 24 to 25, 2013 from the Atlantic to the Pacific through the Panama canal

Our 50-mile canal transit took two days. We started on Friday afternoon and completed the transit on Saturday morning.

We hired an agent, Erick Galvez, to arrange our canal transit for us. It costs a bit more to use an agent but it was well worthwhile for us first-timers. Erick did the scheduling and paperwork on our behalf with the canal authorities. 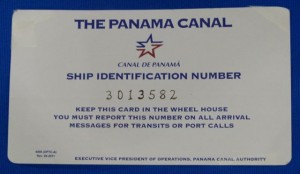 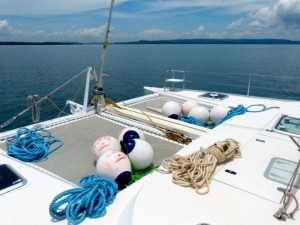 Lines and fenders, ready for use.

Erick also arranged a line handler for us. Umberto from Colombia who had done about 70 transits over the past five years. Umberto didn’t speak much English but with so much experience, he was a really good choice for our line handler. We were happy to have him on board. 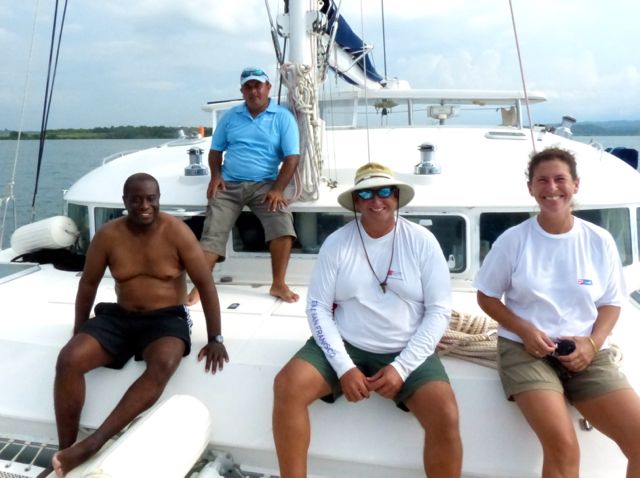 Around 4:15 pm, our advisor came on the boat. The Panama canal authorities put an employee on all boats transiting in the canal. Small boats like ours get “an advisor”. Boats over 65 ft get a canal pilot who actually drives the boat. Our advisor, Freddie, was a nice guy. We’d heard mixed reviews about advisors. I was happy that we got a good guy. Freddie’s regular job is as a dredging engineer for the canal, but he advises on transits for fun and overtime. Freddie’s mother tongue is English so no language barrier. Freddie’s grandfather was from Barbados — he came to Panama to work on the canal. (Siggy’s mum is from Barbados, so Freddie and Siggy did a little Bajan roots talk — family names and parishes.) 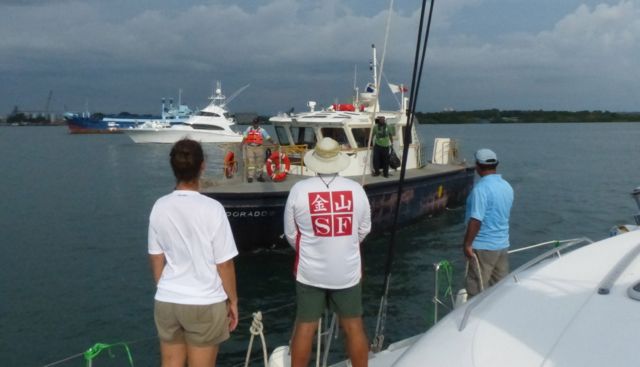 Freddie, in green on the right, arrives on On Delay.

While waiting for our advisor, we watched a Canal pilot get off a freighter completing its transit. The little boat matched speed with the freighter and the pilot climbed down a long ladder. 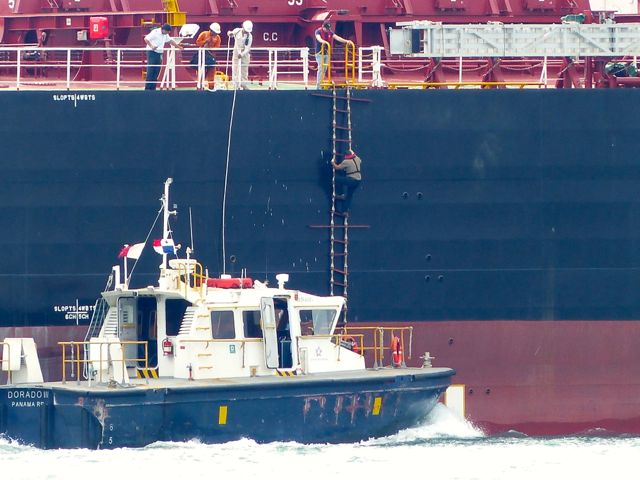 Exiting from a freighter. Both boats are moving at speed: note the bow wave on the small boat.

Another very cool thing we saw while waiting was: The doors for the new locks. They are HUGE. The Panama canal is being expanded. Two new sets of locks are being built. These locks are longer (40%) and wider (63%) and deeper than existing ones, and this will double the capacity of the canal. Bigger ships carrying up to 13,000 containers will be able to transit. The current max is 8,000 containers per ship. This will be a nice earner for Panama, and also save shipping companies fuel and time. (Read more about the expansion project on this page of the Washington Post.)

Doors for the new locks, recently arrived from Italy.

I never thought we’d be the bread in a canal sandwich. I thought maybe we’d be the sandwich filling or perhaps the topping on an open-face sandwich but not the bread. However, in the first locks, we were the bread of a powerboat sandwich.

Last year, we’d seen a “cat sandwich” in the canal: a catamaran with a monohull on each side. I thought we might do the same on our transit. Seemed a safe way to go with a monohull buffering each side. However, it was not to be. We and a French catamaran were tied to either side to a big (85ft) sports-fisher powerboat from Avalon, California. 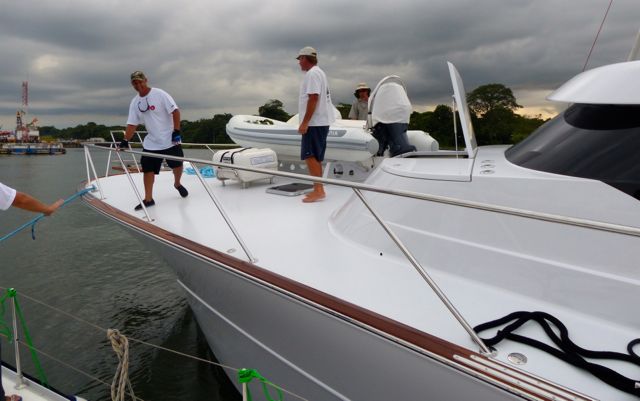 On Delay tying up to the Kelsey Lee.

The Kelsey Lee in the middle provided the power while Pete and Dominic (the French skipper) were told to keep their engines in neutral and let the Kelsey Lee do the driving. The two catamarans provided the fenders and the long lines. 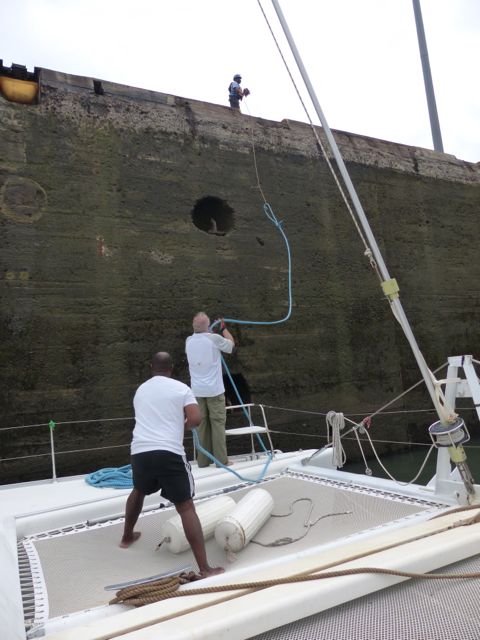 In the lock, passing up the line to the canal employee above. Thin “messenger” lines with a “monkey’s fist” are thrown down and used to pull up the strong blue lines tied to the boats.

Kéa hadn’t rented lines for the transit; they were using old ropes from sails. One of these broke in the first lock and caused a panic. We lent them one of our lines for the next locks. 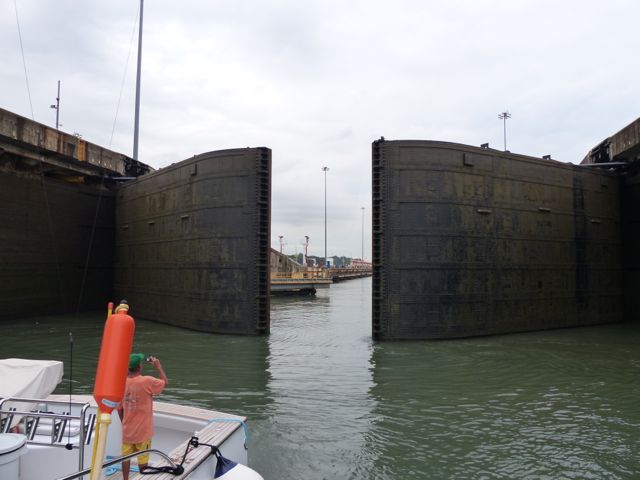 The doors of the first lock are closing. 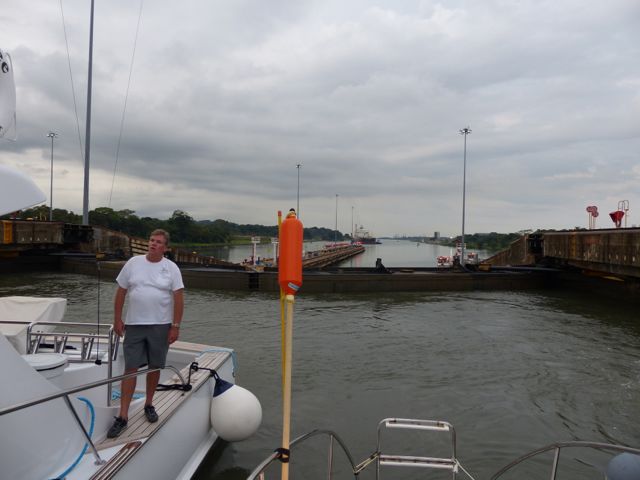 Same doors now that the lock has filled with water. And, one of the mouth-breathers from the Kelsey Lee.

Going up in the locks was a bit scary. The water rushes in and creates turbulence. Kelsey Lee had trouble keeping the whole sandwich centered in the locks. At one point, Freddie said to Pete at the helm, “Do what ever you need to do Skip to keep your boat safe.” Pete did, and we got through safely.

They don’t just put three little fibreglass boats in a lock at a time — that would be wasteful. Ahead of us in the same lock was the big BBC Kimberly. 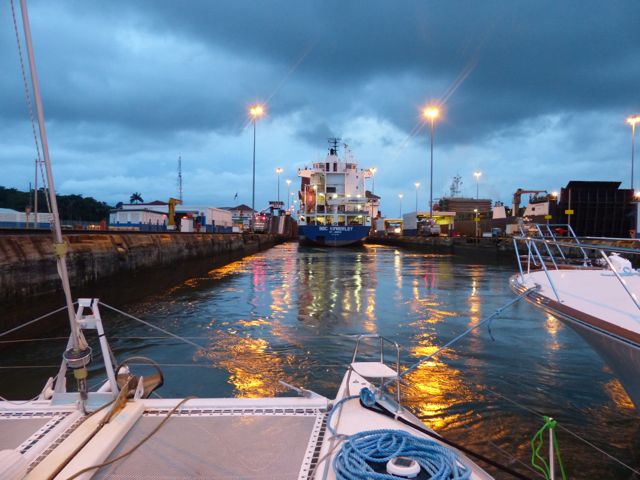 We shared the locks with with the big BBC Kimberly. 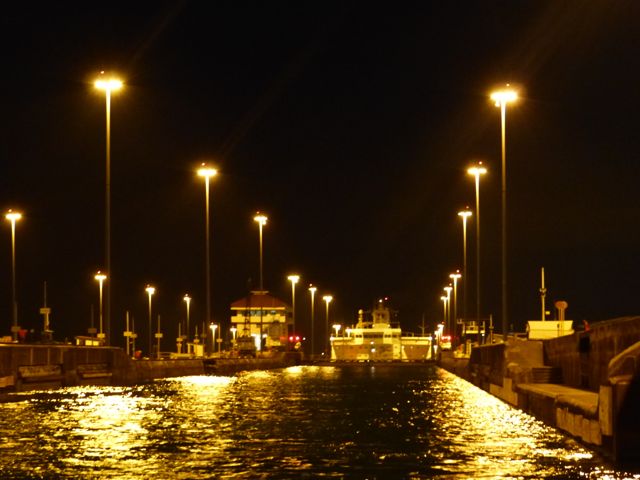 It was already dark when we left the last of the three Gatun locks.

In Gatun lake, just beyond the Gatun locks, we tied up for the night on a freighter-sized mooring ball (10 ft diameter, big enough to stand on). We said goodbye to Freddie, who got picked up by one of the working boats. We had a pleasant meal of pasta and salad and red wine; it seemed so normal except weird that we were in a lake between two oceans and had a Colombian line-handler dining with us. This was the first time that On Delay had been in fresh water.

Day 2 started early. The two advisors woke us up when they arrived on the boat at 6 am pronto. This day, we got two Spanish speaking advisors, Ricardo the trainer and Miguel the trainee. Both good guys with passable English. I got up and prepared breakfast of Colombian-style eggs for 9. From what we’d read and heard, there was a lot of emphasis on feeding the advisors. And, Ricardo (who we liked a lot) did look like he was accustomed to being well fed.

The first part of the day was motoring through the lake and then through the narrower cuts. We passed freighters and tour boats and crocodiles but didn’t see any other sailboats. The shoreline was dotted with sights which the big ships use for navigation. Although, perhaps it is all by GPS now.

A freighter ahead of us. Notice the sights on shore which line up at a given approach angle.

We were warned several times against swimming in the lake because of crocodiles.

A crocodile in the lake.

The cuts were impressive too.

Part of the Gaillard Cut.

When we got to the Pedro Miguel locks, we rafted up with the French catamaran, Kéa, from the day before. [Interestingly, today Kéa had proper lines. We concluded that someone must have brought lines to their boat on Friday night.] 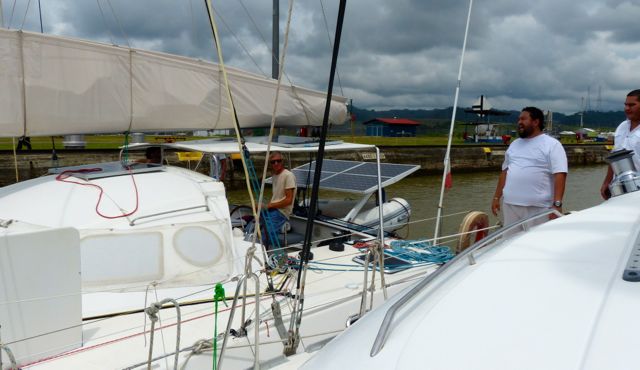 Tied to Kéa. L to R: Dominic, Ricardo, and Miguel.

This time, we were the meat on the open-faced sandwich: Pete did the driving for the whole sandwich, and later reported that it’s not easy. On Delay doesn’t steer as normal with another catamaran attached.

We shared the locks with tour boats. On Delay now appears in many people’s vacation photos. 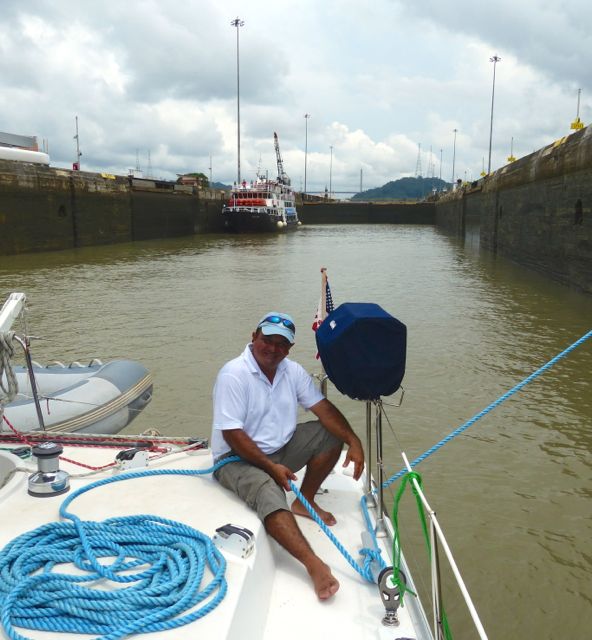 Umberto, our line handler. In the background is the tour boat. The locks are less crowded today.

Even more photos were taken of us as we descended the Miraflores locks, which is overlooked by the visitor’s center.

The Miraflores Visitor Center. Last December we were here watching other sailboats transit. 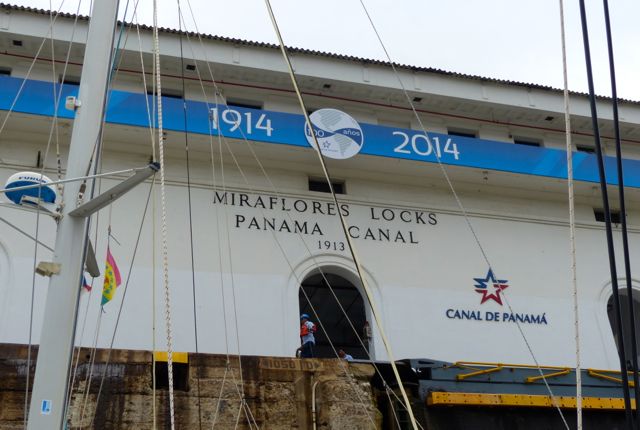 Around midday, we left the lower Miraflores lock and the door to the Pacific Ocean opened to us. 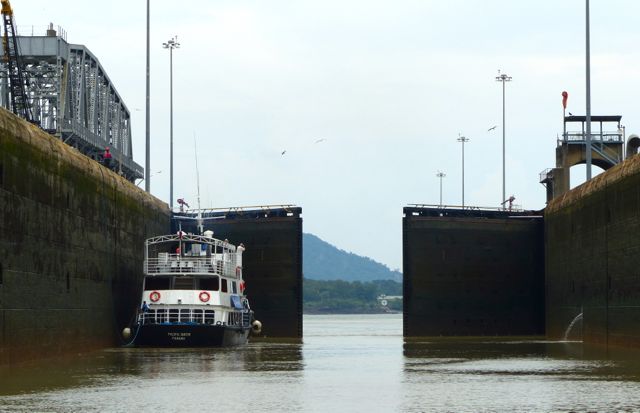 The Pacific lies ahead.

Years ago, I read an article in a cruising magazine about a couple transiting the canal in their sailboat. It sounded like a horrible experience and the article was written as if theirs was also a normal experience. Our canal transit was very much the opposite. Things went smoothly and safely. Everyone we encountered was helpful and professional and spoke sufficient English. We enjoyed our two-day journey by boat across the continental divide.

Plus, our crew was great. The Umberto, the line-handler was very good. We liked our three canal-appointed advisors. Siggy and Hilary (first recidivist guests) came out specially to do the transit with us. It was lovely to have them with us through the canal. 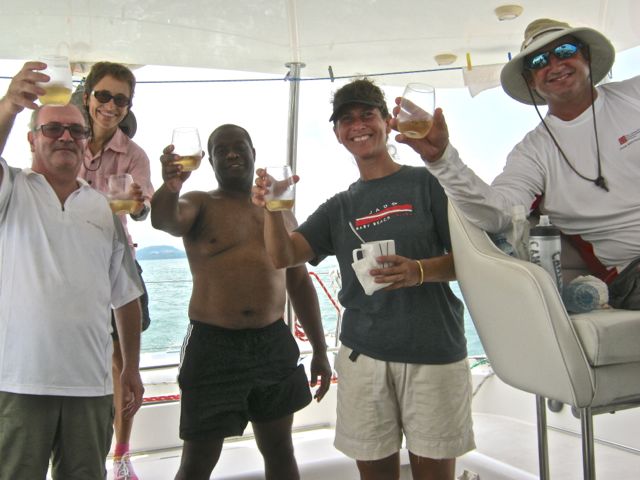 Celebrating our safe arrival in the Pacific with a nice bottle of bubbly brought by Siggy and Hilary.

6 thoughts on “Our shortest crossing: from one ocean to another OR We were the bread!”