The guide books listed hiking at the top of the what-to-do-in-Providencia list. Petra signed up Pete, me and herself for a guided trip. We negotiated a start time of 7am. We wanted to do the bulk of the hike while it was still relatively cool.

The other three (Gayle, Tony, and Dick) met up for breakfast at the more civilized hour of 9 am.

The part of the adventure that Petra was most nervous about was the road trip to the starting point on the back of a motorbike. This bit turned out to be even worse than feared because (i) we rode three up — me in the middle and Petra at the back — and (ii) the start point was as far away as possible on the small island — evidenced by the fact that on the return trip (mercifully in a car) we drove the rest of the way around the island. Pete so wished he had a camera to capture the three of us on the bike. He got to ride on the back of the guide’s scooter — also a picture that went uncaptured.

It was a nice hike: 360 meters change in elevation to the highest point on the island. It rained some along the way, but was clear at the top. From the top, we were able to see On Delay and to phone down to Gayle, Tony and Dick who were lingering over breakfast on the boat.

Here are some pictures of the day. 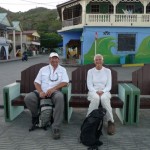 Pete and Petra waiting for Julia our guide. 7 am. 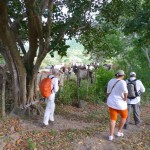 Starting the hike; walking past the cows. 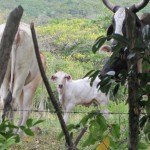 Portrait of a young cow. 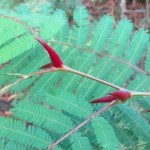 Cockspur plant. Julia was very good about pointing out interesting plants along the way. 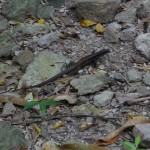 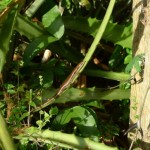 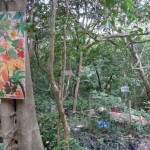 We encountered an NGO staffed by local people. They are busy replanting native trees. 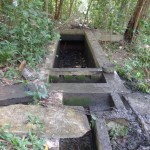 The NGO is refurbishing water catchment systems that fell into disrepair after the government built a reservoir. 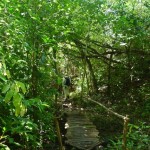 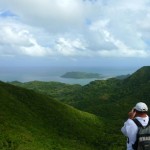 Pete pauses to look out. He is almost at the top. 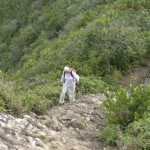 Petra is almost at the top now too. 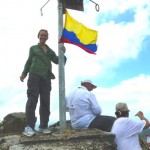 Jane at the top with the flag. 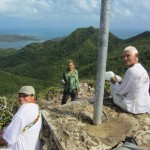 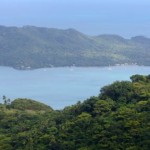 Looking down to On Delay. She’s the one with the tallest mast.