Kuna Yala is a semi-autonomous region of Panama. The region is an archipelago of islands (300 – 400 of them) and a long thin strip of Atlantic-side mainland adjacent to the islands. Kuna Yala begins just west of the border with Colombia.

The region is mostly governed and peopled by the Kuna indians, many of whom live in family or tribal communities. Homes are typically made of bamboo with thatched roofs. The men mostly fish, gather coconuts, and do some subsistence farming on the mainland (bananas, plantains, yucca, mango, etc.). Kuna society is matriarchal. The women make molas for sale to collectors and tourists and so are major contributors to the economy of Kuna Yala. The women also wear traditional dress.

Kunas own all the coconuts in Kuna Yala. Every island (inhabited or not) has been planted with coconuts. Coconuts are bought by Colombian traders who visit the islands in small freighters.

A Kuna home on an outer island, well planted with coconuts.

Kunas travel all over Kuna Yala harvesting coconuts. This man is sailing his coconut-filled ulu (dugout canoe) over 2 miles from Aridup to Playon Chico. 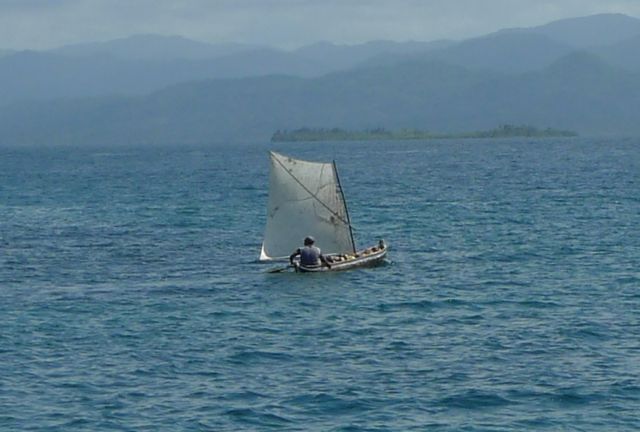 An ulu full of coconuts.

The day we were in Playon Chico, the Kuna were trading plantains for detergent, salt, crackers, and children’s clothing from Colombia. 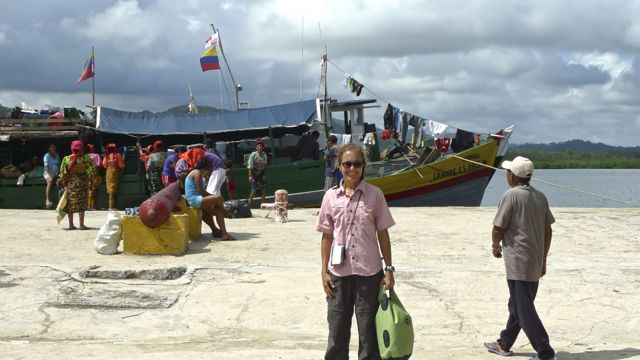 Note the crew’s laundry strung up at the front of the boat.

The Kuna earn some money by taxing yachts. Each area in Kuna Yala levies its own taxes. We were taxed four times in the course of our month. In each case, it was an older man alone in a ulu who came to collect the tax. The taxes were ~$10 and good for an extended time period. A receipt, printed or stamped with the name of the community, was exchanged for the tax money. Keep the receipt as proof of payment so that you can’t be taxed twice.

At Niadup, our tax collector, Señor Aquilino offered to give us a tour of the village the following day. We took him up on the offer.

The Kuna villages we saw were all densely populated: 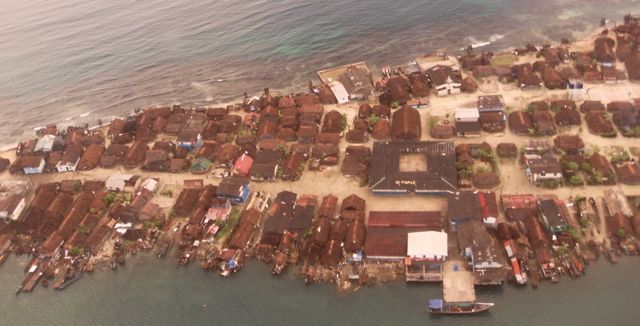 A Kuna village from the air. (Photo by Shannon) 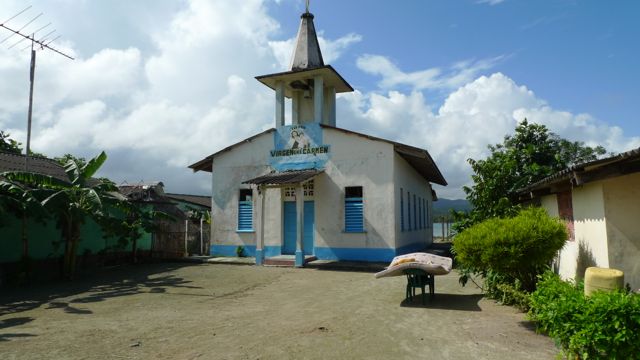 The Catholic church in Niadup. It looks prettier from the water.

We also saw the Congresso house where most nights a week everyone gathers to discuss village matters. In traditional villages, this is quite formal with the chief in his hammock in the centre along with his interpreter and everyone else sitting on benches around the edge of the room. And when the proceedings are dull, someone shouts loudly at random intervals to wake up the dozers. (I read this in the guide book — didn’t witness it myself.) 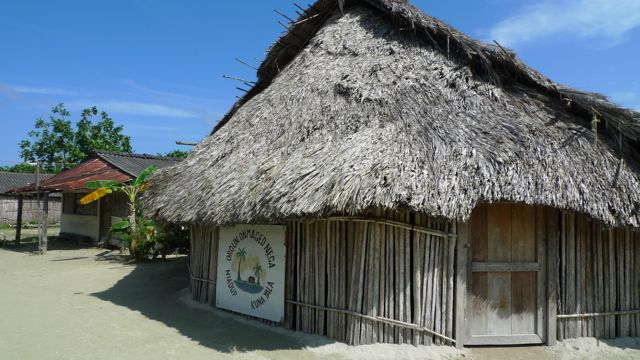 The congresso house at Niadup. Our guide explains that the meeting starts between 6 pm and 7 pm and goes until 9 pm or 10 pm every night.

We were in Niadup at the start of school vacation. The place was overrun with children playing outside. 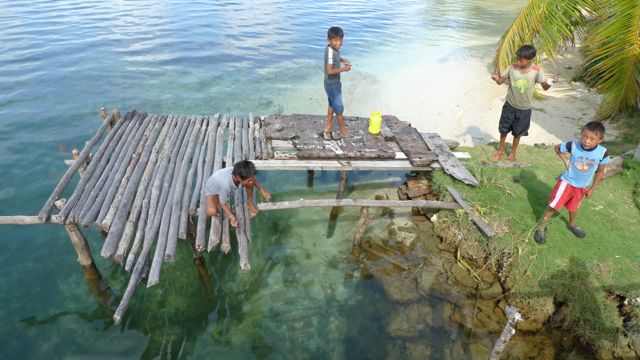 These boys were having a wonderful time fishing and were keen to show us their catch.

However, not every kid should play outside. Due to inbreeding, there are a lot of albino Kunas. During our month stay, we saw six. Our guide explained that the little guy in the photo below had got such a sunburn on his hand that it was wrapped up to heal. He asked us if we had any creams on our boat to help. We donated three high-SPF sunscreens and and bottle of soothing aloe. 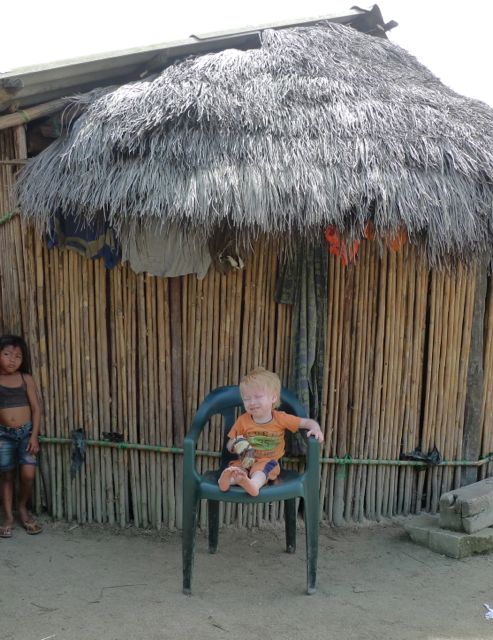 Albino Kuna child in Niadup. (Aside: adults didn’t want their pictures taken. When we got out our camera, they plunked the child on the chair and then ran out of the frame.)

Also in Niadup, we met a local painter and bought one of his attractive paintings depicting life in Kuna Yala in days gone by. 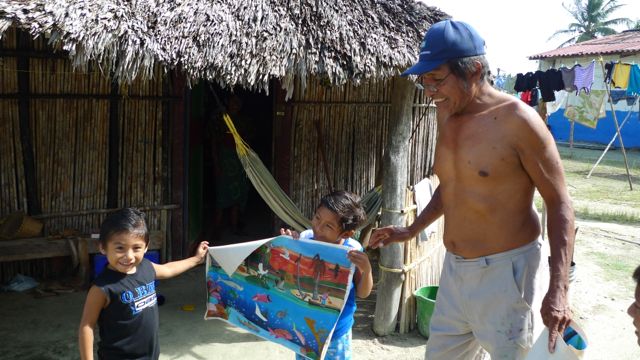 Tony was supposed to be taking the kids alone (photo below) but caught the un-posed shot above too. 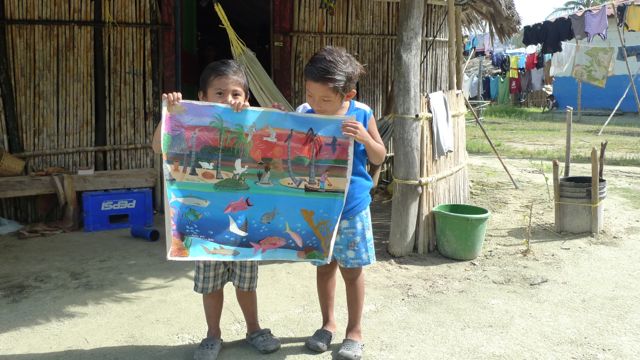 Before this official picture was taken, the mom ran a comb through the boys’ hair — such a universal mother action.

And to conclude, a final snap with our guide. 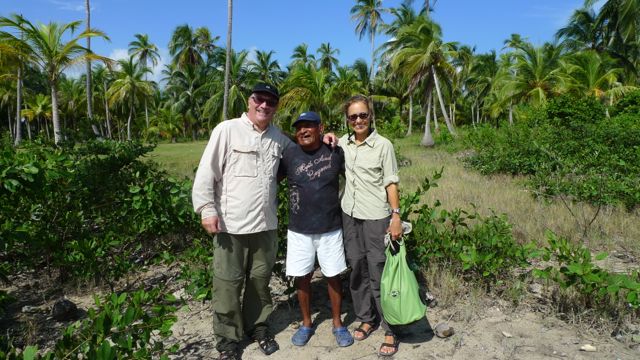 One of the islands (Isla Tigre) keeps pigs. They keep the pigs in clever “self-cleaning” pens by the sea. When the tide is high, the pens get cleaned out. 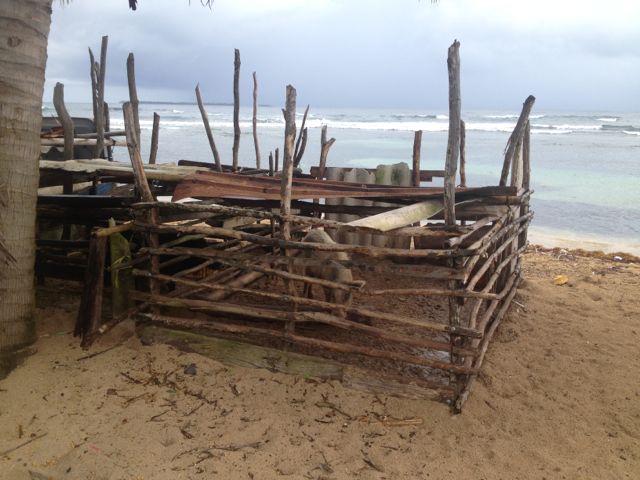 A nice looking little pig in a pen.