Doesn’t that title sound better than “Shopping for charts”?

Tony had read that we could buy charts at the local naval school. We imagined that we’d go somewhere equivalent to a college bookstore that sold maps instead of textbooks. However, it was more different and surreal than our imaginings. 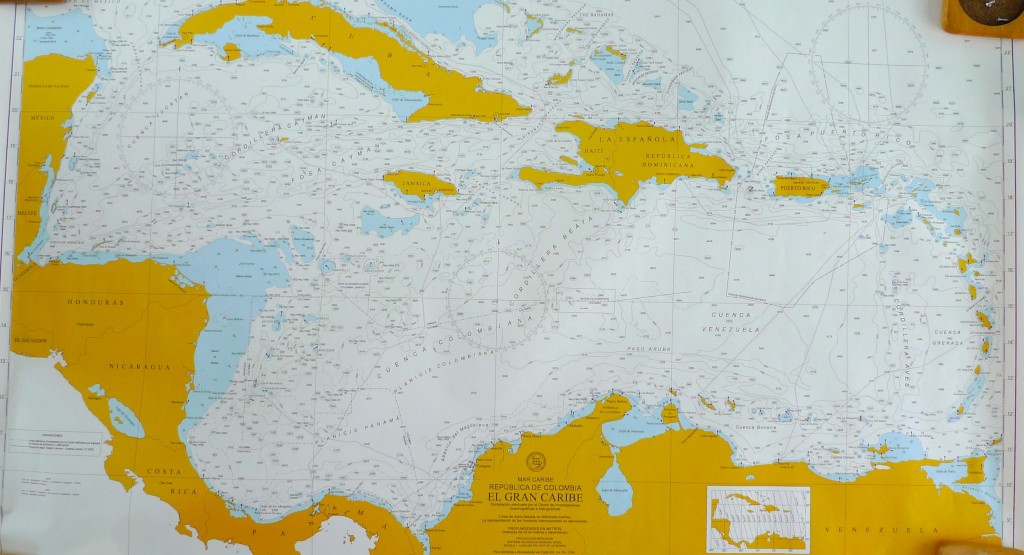 The taxi driver dropped us at the guard house; he wasn’t allowed to drive us in. We walked the 50 yards to the waiting area: a big sterile room with a few dozen seats (hard seats like a bus station) fixed in rows. A cadet at the entrance peered into our bags and sent them through a scanner. Gayle approached the glassed-in wicket and explained that we wanted to buy charts. We were told to sit and wait.

We weren’t given any indication whether we would need to wait for minutes or hours.

One of the cadets at the door, who spoke English well, asked us where we were from. He told us he was from Miami! Born Colombian, he was in Colombia to do his mandatory military service. Diego L is fine young man, a credit to both his countries. We enjoyed chatting to him. He is 18 months into his two-year service. After that, his plan is to go home to Miami, take one month off and then join the Marines. His brother is in the US Marines and served in Afghanistan. Of note: even as a cadet, Diego had seen combat in Colombia — on the Pacific coast where Colombia continues to fight an insurgency.

Anyhow, chatting with Diego passed the time until we were summoned back to the wicket to surrender our IDs in exchange for numbered badges. Captain Rodriguez with very shiny shoes escorted us to a double-cab pickup truck and he and driver took us across the campus to el Servicio Hidrográfico. There, we sat in an air-conditioned office, minimally decorated with plaques, hats and mugs from other hydrographic departments (I was pleased to see a Canadian coffee mug on display) and looked through the very impressive stack of Colombian charts while Captain Rodriguez looked on patiently and helped us identify regions. Eventually we settled on eight charts — all but one of them were in stock. The charts look great — very detailed with the bonus of being reasonably priced (~$20 each). We are now set for Panama and beyond.

Then, with military precision, the process was reversed: we left the office, the driver took us back to the sterile waiting room where we surrendered our numbered badges in exchange for our IDs, we said good bye to Diego, had our bags scanned out, and walked the 50 yards to the guard house to rejoin civilian world.

As it happened, the President of Colombia, an alumnus of the school, was visiting the Naval School at the same time that we were there — that was one of the reasons sited for the delay in processing us in the waiting room. And our driver, whose English was limited, was quite keen to tell us that the President was there. Unfortunately, we did not get to see Mr. Santos.

We did not take photographs while visiting the Naval School. However, here are a couple of photos gleaned from the interwebs: 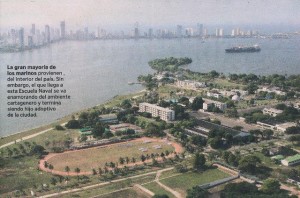 Arial view of the campus on Isla Manzanillo; the second largest naval school in the world, we were told.

This is a portrait of Mr. Santos, who should be in our thoughts and prayers for the next while as peace talks between his government and the FARC take place in Oslo. (Obama urges Colombia rebels to lay down weapons.) 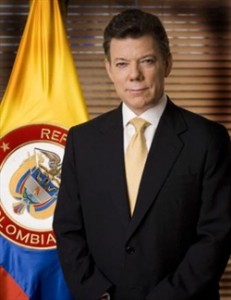